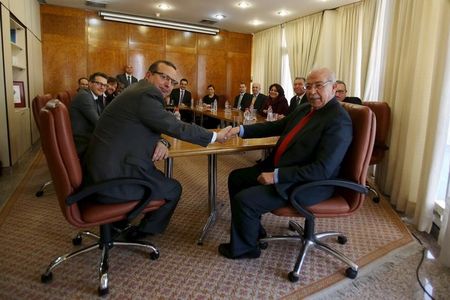 TUNIS (Reuters) – The IMF began talks with Tunisia on Thursday over a new credit programme, tied to measures to strengthen its economy and finances and likely to be worth at least $1.7 billion over four years, a central bank official told Reuters.

Protests to demand work last month turned violent, underscoring the fragility of the economic growth that Tunisia needs to underpin its democratic transition.

Amine Mati, the head of the IMF delegation in Tunisia, met the Central Bank Governor Chedli Ayari to discuss the details of the credit programme on Thursday.

“The programme will be in accordance with new economic reforms in Tunisia this year and during the three next years,” an central bank official told Reuters after the meeting.

Mati will also meet the prime minister’s adviser in charge of economic reforms.

Tunisia is about to get a loan of 500 million euros ($550 million) from the European Union to support the economy, and former colonial ruler France last month pledged 1 billion euros in aid over five years.

The new IMF programme will follow on from a two-year deal totalling about $1.74 billion that was agreed in 2013 and extended last year by seven months to buy time for Tunisia to put banking and fiscal reforms in place.

Under the programme, Tunisia also agreed to keep its budget deficit under control and make the foreign exchange market more flexible.