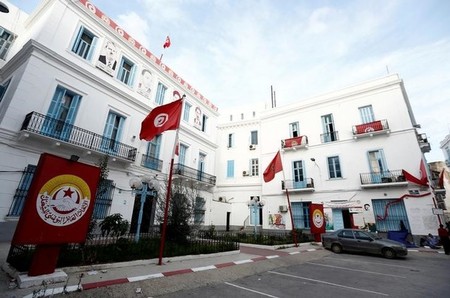 TUNIS (Reuters) – Tunisia’s powerful UGTT union has cancelled a planned public sector general strike after reaching a deal with the government on salary increases covering the next two years, officials said on Wednesday.

The agreement reduces the prospect of widespread social unrest over austerity measures proposed in the 2017 draft budget, though the government still faces protests and industrial action from several sectors.

The UGTT had called a strike for Thursday over a proposed freeze on public sector wage increases. Under a compromise deal signed on Wednesday, the government will spread wage rises over the next two years, government and union officials told Reuters.

The UGTT also said it had also cancelled a private sector strike after entering salary negotiations with the UTICA industry and business employers’ association.

Tunisia has been praised as a rare Arab example of moderate politics and democratic transition since the overthrow of autocrat Zine El-Abidine Ben Ali in a 2011 uprising. But its economy has struggled and it faces pressure from international lenders to reduce public spending and cut the deficit.

The IMF says public sector pay in the North African state accounts for about 13.5 percent of gross domestic product, one of the highest rates in the world.

Many Tunisians are concerned about the rising cost of living, unemployment and the continued marginalisation of rural areas – factors that helped fuel the country’s uprising and, more recently, Islamist militancy among some disaffected young men.