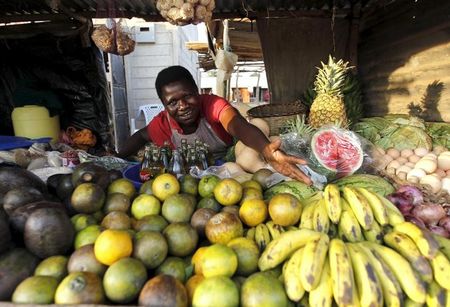 KAMPALA (Reuters) – Uganda’s inflation eased to 7.6 percent year-on-year in January from a revised 8.4 percent a month earlier, helped by a slowdown in food inflation, the statistics office said on Monday.

The Uganda Bureau of Statistics (UBOS) said annual food inflation had slowed to 12.7 percent in January, from 13.8 percent in December.

Core inflation – which excludes food, fuel, electricity and metered water – decreased to 7.1 percent in January from 7.6 percent in December, UBOS said in a news conference.

On a monthly basis, headline prices rose 0.1 percent in January after rising 0.2 percent in December.

David Bagambe, a trader at Diamond Trust Bank, said that, despite the decrease in inflation, the central bank was unlikely to start easing its policy stance because it needed to maintain high yields on its debt instruments to manage liquidity.

“For now, the central bank is more concerned about the huge amount of liquidity in the system than the small changes in inflation,” he said.