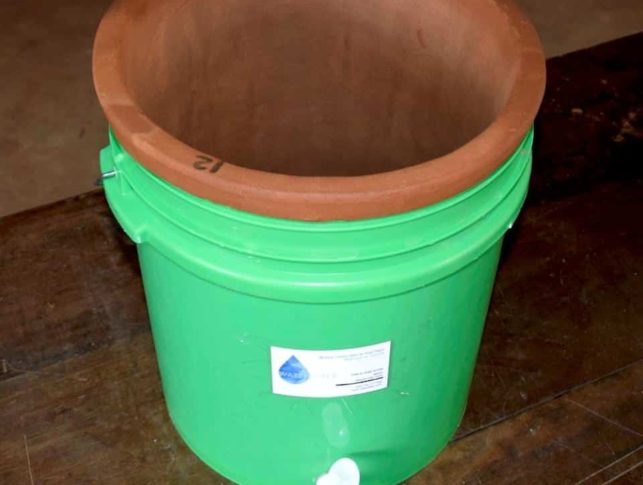 A simple and inexpensive water filtration device soon will be produced in Tanzania and marketed across the continent, where tens of millions of people do not have access to drinking water.

The Waterfilter was designed for emerging nations by a group of students in India under the aegis of the nonprofit Enactus. The device is a small cistern made from clay mixed with organic materials such as coffee grounds. The cistern is heated with water inside and the organic material burns away, creating micropores that capture impurities while letting the water drip out.

According to Michael Simet, a program manager with the Germany-based Enactus, the cistern can clean about two to four liters of water per hour, removing 99.9 percent of impurities.

Enactus expects to start production of the Waterfilter soon in Kigoma, Tanzania. However, the nonprofit organization will not become the manufacturer. Instead Enactus plans to teach local residents how to make the device on their own, including an important process to achieve the right mix of the clay with other materials.

Designed by students in India

The device will sell for $28 and is expected to last about two years, meaning the average cost is just over $1 per month.

The filtration device was designed by a group of students at Delhi University’s Sri Ram College of Commerce in India, where potable water is also unavailable in many areas.

Under a project named Asbah, the student members of the Enactus SRCC Society in collaboration with the Council of Scientific and Industrial Research (SRCC) set out to develop an inexpensive clay filter that could be made and sold locally. In India, potters mix readily available river sand or sawdust with clay to create the filter.

Enactus is an international nonprofit social enterprise organization of students at more than 1,600 universities in more than three dozen countries. It has about 67,000 active student members.

Access to water is an urgent issue for many parts of the world, including much of Africa.

As the population of the continent has grown, the number of people who do not have access to safe drinking water has increased nearly 20 percent, from 265 million in 1990 to 316 million last year.

At the same time, access in sub-Saharan Africa has increased by 20 percent in the past 25 years.

African stakeholders want water supply and sanitation to be considered as part of the November Climate Change conference (COP22) in Morocco in November. They want water issues to be incorporated in climate talks.

More than 20 foreign ministers, including 18 from Africa, issued a call for “Water for Africa” in July at climate change talks in Rabat to highlight the need to mobilize around pressing water issues on the continent.

Charafat Afailal, Morocco’s Minister in Charge of Water, said “40 percent of the African population lives under water stress and that the figure will increase to 64 percent by 2025 if nothing is done.”

Kate Bayliss, a research fellow at the School of Oriental and African Studies at the University of London, said investment in water and sanitation infrastructure has lagged badly.

Bayliss estimated Africa would need to spend $15 billion annually to meet its development targets. Instead, she said, spending is about $3.6 billion.