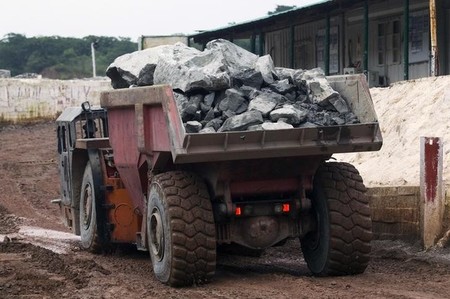 MELBOURNE (Reuters) – A plan by Zambia to put a duty on copper concentrates imports could put a kink in the global supply chain for the metal, industry sources said, by forcing neighbouring Democratic Republic of Congo (DRC) to send surplus mine output elsewhere.

The 7.5 percent duty announced earlier this month and due to come into force at the start of 2017, is likely to disrupt supply of refined metal in the early part of the year, just as the global market moves away from surplus, helping to support prices.

Zambia, Africa’s second-largest copper producer, will produce about 425,000 tonnes of copper metal this year, according to consultancy GFMS, accounting for about 2 percent of global output.

The country’s smelters, including those run by privately held Eurasian Resources Group (ERG) and India’s Vedanta Resources, currently source some 500,000 tonnes of concentrate from the DRC, according to consultants Wood Mackenzie.

This is made up of 400,000 tonnes from ERG’s Frontier mine and around 100,000 tonnes from La Sino-Congolaise Des Mines S.A. (Sicomines), a joint venture between DRC’s Gecamines, China Railway Construction Corp. and Sinohydro Corp.

“It will not be viable for smelters to buy concentrates from the DRC,” said an industry source working in Zambia. “This change will upset the supply chain for the first six months of 2017.”

Miners in the DRC would be forced to look for other ways to process their concentrate, such as sending it some 3,000 km (1,860 miles) overland to Durban in South Africa for shipping to China, a two-month trip, three industry sources said.

This would take the supplies out of circulation for several months and delay production of up to 150,000 tonnes of copper metal.

Smelters in Zambia, where capacity far outstrips current mine supply, are already struggling with low feed stocks after miners including Glencore closed copper shafts as prices fell to six-year lows.

The duty could mean they have even less concentrate to process, at least in the short term, raising costs per unit.

“People are well aware that Zambian smelters are under considerable stress to which this will add significantly,” said a source familiar with the matter.

The sources said the most affected smelters would be ERG’s Chambishi Smelter and Vedanta’s Konkola Copper Mine which source a significant part of their concentrate needs from DRC.

The new duty was likely aimed at boosting Zambian refined metal production from local concentrate supplies, but the move could backfire and instead benefit smelters in other countries such as China and India, Wood Mackenzie said.

Companies with local mines including First Quantum Minerals and Barrick Gold could increase output, traders said. Officials from both companies did not respond to requests for comment.

The Zambian government was also coming under sustained lobbying from smelters to reverse its proposal, industry sources said.

“Some are already threatening to close down,” said a Swiss trader active in the region. “I believe that the duty is not a definitive decision”.

(Reporting by Melanie Burton. Additional reporting by Nicole Mordant in Vancouver and David Stanway in Shanghai; Editing by Richard Pullin)