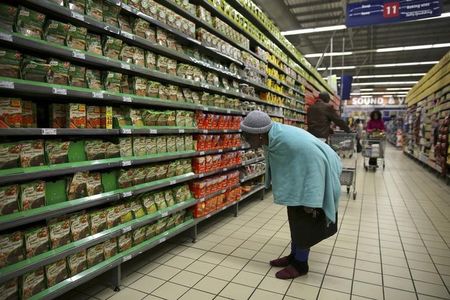 The rate hike, the first since November 2014, also came after a steep fall by Zambia’s kwacha brought on by tumbling copper prices as the consumption in top copper consumer China slowed along with its economy.

The southern African nation had kept the key rate unchanged at 12.5 percent in August, saying it predicted inflation would breach the regulator’s 7 percent target by year end.

But consumer prices rose to 14.3 percent from 7.7 percent in September, as Zambia’s currency weakened.

“A more significant reversal of recent losses would require some turnaround in copper prices and much higher interbank rates.”

Economic growth is expected at 4.6 percent in 2015 due to weaker global activity and lower commodity prices as well as a domestic electricity crunch, but would tick up to 5 percent next year, finance minister Alexander Chikwanda said in the 2016 budget speech.

Zambia suffers from severe power shortages. The state utility firm Zesco Ltd has cut the electricity supply to mining firms and doubled prices for other industrial users and household consumers.

Despite these measures, the price of copper, Zambia’s main export, was still low and power outages were expected to continue putting pressure on the kwacha and spiralling inflation, BanABC head of Treasury John Mapiye said.

“We expect yields to rise and that may attract foreign portfolio investment in securities and help strengthen the kwacha temporarily,” Mapiye said.

“The cost of borrowing will increase and ultimately this will filter down to the consumer hence we still expect to see an upward spiral in the rate of inflation.”