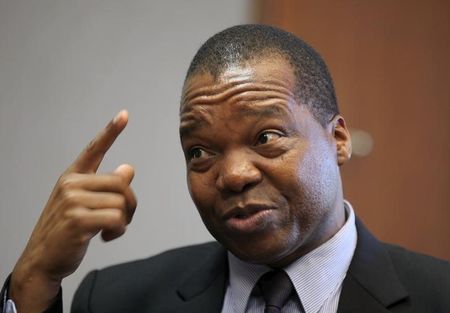 HARARE (Reuters) – Zimbabwe expects a loan from the International Monetary Fund(IMF) in the third quarter of this year, the first since 1999, after paying off foreign lenders by the end of June, the central bank governor said on Wednesday.

President Robert Mugabe’s government last week agreed to major reforms including compensation for evicted white farmers and a big reduction in public sector wages as the government tries to woo back international lenders.

Central bank governor John Mangudya said the IMF would decide the exact amount of the loan to issue at a later date. The fund had agreed to double the amount available for Zimbabwe, known as a financial quota, to $984 million, he said.

“We are talking about the third quarter, that’s when you see most of the action happening,” Mangudya told Reuters in an interview, referring to when Harare expected the loan.

Zimbabwe would also receive an $896 million loan from an unnamed country to pay off arrears to the World Bank.

In addition, the African Export-Import Bank would provide $601 million for Harare to clear arrears to the African Development Bank (AfDB).

Zimbabwe would then receive the same amount as a grant from the AfDB, Mangudya said.

The Southern African country’s foreign debt stands at $8.3 billion, of which $1.8 billion is arrears.

Zimbabwe is trying to emerge from years of international isolation, largely blamed on Mugabe’s policies, including the seizures of farms from white farmers.

The worst drought since 1992 has left 4 million Zimbabweans facing hunger.

Mangudya said the drought had forced the government to lower its growth target for 2016 to below 2 percent from 2.7 percent. The IMF and World Bank forecast growth of 1.4 percent and 1.5 percent respectively.

Once Zimbabwe clears its arrears, it would be ready for rating by international ratings agencies, with a view to issue international bonds in future, said Mangudya.

Mangudya said he supported the government’s decision to take over diamond mining in Marange because the government was receiving little money from the operations.

“After the rating we will then go for the Eurobonds and all to raise money on the international capital markets,” he said.

The government had issued $250 million in treasury bills to raise money for its operations in 2015, Mangudya said, adding that the bank would soon start holding public auctions of treasury bills to enhance transparency in state borrowing.

The central bank also issued $1 billion in bills last year to creditors of the bank, which owes $1.35 billion.

(By MacDonald Dzirutwe. Editing by James Macharia and Tom Heneghan)