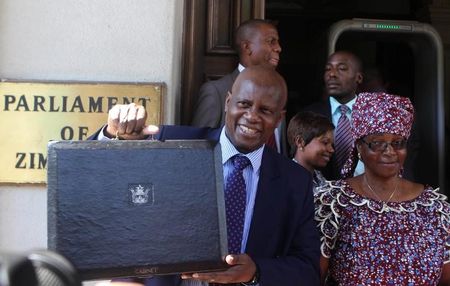 HARARE (Reuters) – Zimbabwe needs an annual growth rate of up to 8 percent over the next 10 to 15 years to revamp its economy, Finance Minister Patrick Chinamasa said on Thursday, in addition to other reforms agreed with an International Monetary Fund delegation.

On Wednesday, Chinamasa said President Robert Mugabe had agreed to major reforms, including compensation for evicted white farmers and a big reduction in public sector wages as the government tries to woo back international lenders.

Chinamasa said that new loans from international lenders will only come if the drought-stricken Southern African nation showed the capacity to introduce a raft of economic reforms.

“Any reform agenda is painful. The journey we have travelled has been difficult and will remain difficult,” Chinamasa told a forum discussing Zimbabwe’s future prospects.

Chinamasa and Reserve Bank governor John Mangudya are leading Zimbabwe’s re-engagement with international lenders and the finance minister has previously said he has had to overcome divisions within Mugabe’s cabinet to pursue that process.

Zimbabwe is trying to emerge from more than a decade of isolation that saw the IMF, World Bank and African Development Bank freeze lending in 1999. Western powers imposed sanctions on Mugabe’s government over allegations of vote rigging and human rights abuses. Mugabe rejects the charges.

The IMF executive board will on May. 2 consider Harare’s plan to repay $1.8 billion in arrears. Chinamasa said he was seeking clear commitments from the IMF that clearing the arrears would trigger new financial aid.

“As I stand before you I am in buoyant spirits because I know that the measures that we are taking will exploit and realize the full potential of this country. We just need an uninterrupted process of reform,” said Chinamasa.

Africa, Business, Latest Updates from Reuters Zimbabwe needs up to 8% growth in next decade to revamp economy