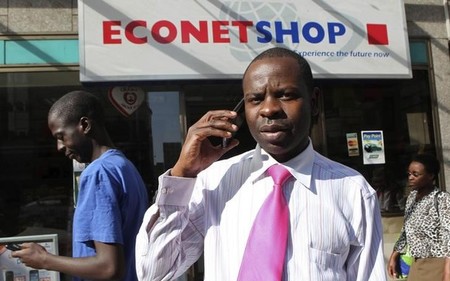 HARARE (Reuters) – Zimbabwe’s biggest mobile telephone company has pushed up data charges by a multiple of 25 in line with new regulations, prompting critics to complain that President Robert Mugabe’s government is trying to throttle the use of social media.

Econet Wireless’s new cheapest data package, which came into effect on Wednesday night, will see users get 10 megabytes for $1, compared with 250 megabytes for the same amount previously.

Last year, activists used the Internet to mobilise the biggest anti-government protests in a decade, bypassing traditional opposition parties as anger grew over Mugabe’s handling of a failing economy.

Social media group #ThisFlag, which helped organise those protests, said of the price hike: “They didn’t want us to continue to take pictures and videos of their abuse, neglect, incompetence and show the world.”

The increase came after the Postal and Telecoms Regulatory Authority of Zimbabwe (POTRAZ) set a base price of 2 cents per megabyte for data services and 12 cents per minute for voice calls.

POTRAZ said it was consulting “all relevant players”. Its director general was quoted in a state-owned newspaper as saying Zimbabwe had higher data costs than countries like South Africa and Tanzania because of its landlocked geography and smaller population.

Information Communication Technology Minister Supa Mandiwanzira said on Twitter he is abroad on leave until Jan. 30 and “on return to work I will get to the bottom of it.”

Econet Chief Executive Officer Douglas Mboweni said his company was aware that the new charges had caused “pain” but it was forced to comply with directives set by POTRAZ.

“Having said this, we would like to advise you that we will continue engaging the regulator on the impact this has had on you, our valued customers,” Mboweni said in a statement. Econet says on its website it has over 10 million subscribers in a country with a population of 13 million.

Customers took to social media to criticise the company and the regulator, accusing them of helping the government stifle dissent.

Lashias Ncube, a frequent Twitter commentator, said: “Two imperatives feeding off each other, government bid to curtail use of social media finds willing and unwitting ally in corporate greed.”

Zimbabwean activists have used Twitter, Facebook and WhatsApp to vent anger against Mugabe, in power since 1980, and the ruling ZANU-PF party, which they see as detached from their daily struggles.

“We had advanced a million baby steps in technology and connectivity but POTRAZ just threw us back to the stone age,” wrote Temba Dube, who posts regularly on Twitter.

Zimbabwe’s two other mobile phone companies, state-owned NetOne and Telecel, until last year majority owned by Vimpelcom, have yet to announce new prices.