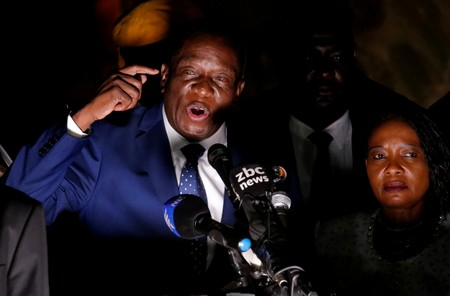 HARARE (Reuters) – Robert Mugabe’s 37-year rule may be over, but a culture of political fawning by the Zimbabwean state media and fear of those in authority still flourishes.

The Herald newspaper and the Zimbabwe Broadcasting Corporation – state and ruling ZANU-PF party mouthpieces – routinely heaped lavish praise on the 93-year-old Mugabe and his wife Grace in sycophantic articles and commentaries.

With the sudden change of guard, Zimbabwe’s official media is having a hard time shaking off old habits and is now tailoring its eulogies to fit Emmerson Mnangagwa, Mugabe’s successor.

State radio intersperses programmes with martial music from the war of independence in honour of Mnangagwa’s war veteran allies and the army.

One morning talk show host spoke glowingly on Tuesday of seeing the presidential motorcade at 0645 GMT. This, he said, signalled the new leader was keeping his word to hit the ground running.

“The president is showing the way so get to work on time,” he said.

Mnangagwa, 75, a close Mugabe ally for several decades, took power after the military takeover on Nov. 15 following a succession battle that split the ruling ZANU-PF party.

“Comrade Emmerson Dambudzo Mnangagwa, (is) a true son of the soil who sacrificed his entire life to serving Zibmabwe as evidenced by the role he played in the liberation struggle as well as after independence up to this day. We are blessed to have you as our leader,” an advertisement by the ministry for women affairs, gender and community development gushed in the Herald.

Not all within the ruling party are comfortable with the trend though.

Justice Wadyajena, a Mnangagwa admirer and outspoken ZANU-PF parliamentarian, reminded his Twitter followers of the dangers of personality cults.

“Those falling all over each other pledging loyalty to President ED are just brutes playing meek,” Wadyajena wrote, referring to Mnangagwa by the initials of his first and middle names.

“If you really are principled, there’s no reason to bootlick, your conduct should speak for itself. We’ve seen the danger of personalizing governance and gatekeeping a NATIONAL FIGURE!!”

Mnangagwa, who served Mugabe loyally for 52 years, is expected to form a new cabinet this week. Zimbabweans are watching to see if he breaks with the past and names a broad-based government or selects figures from the Mugabe era’s old guard.