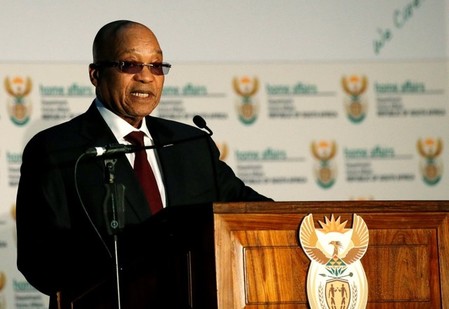 Gordhan said on Wednesday he had done nothing wrong and had no legal obligation to obey a police summons linked to an investigation into whether he used the South African Revenue Service to spy on politicians including Zuma.

The rand, which had tumbled 5 percent since Tuesday in response to the investigation, picked up on Thursday and gained further ground after Zuma’s statement, while government bonds also firmed, even though analysts said the president had offered only qualified support.

News of Gordhan’s summons this week compounded investors’ worries about a power struggle between Zuma and Gordhan as Africa’s most industrialised economy teeters near recession and credit rating agencies consider downgrading it to “junk”.

The main opposition party called on Thursday for a parliamentary debate into what it called a “witch-hunt” against Gordhan, who was in charge of the tax service when the unit under investigation was set up.

Investors and rating agencies back Gordhan’s plans to rein in government spending in an economy that has been forecast by the central bank to register no growth this year.

In his first public comments on the matter since it surfaced late on Tuesday, Zuma said he had noted the concerns by individuals and various organisations over the investigation.

“President Jacob Zuma wishes to express his full support and confidence in the Minister of Finance and emphasises the fact that the minister has not been found guilty of any wrong doing,” the presidency said in a statement.

“The Presidency wishes to also emphasise that President Zuma does not have powers to stop any investigations into any individual/s,” it said, adding that Zuma could not bring a halt to the probe even if it was negatively affecting the economy.

A Zuma-backed plan to build a series of nuclear power plants, at a cost of as much as $60 billion, has caused tension with the Treasury for months and is likely adding to pressure on Gordhan’s position, analysts say. The presidency said in May that Zuma was not warring with Gordhan.

On Thursday, the presidency defended plans by cabinet to give Zuma supervision over state-owned firms after Gordhan’s allies said this would limit the finance minister’s control.

Zuma’s team and the Treasury under Gordhan have disagreed about government spending, including at loss-making state companies like South African Airways, analysts say. [nL8N1B6328]

Analysts also questioned the extent of Zuma’s stated support for his finance minister.

“Anybody who watches English football can tell you when the owner says he has confidence in the manager, the manager is out of there in a week,” he said.

Political activists protested outside the offices of the Hawks, the elite police unit that is investigating Gordhan, in solidarity with the minister, where two former officials of the tax service presented themselves to the police.

A former finance minister, Trevor Manuel, said on Wednesday the economy would be “destroyed” if Zuma fired Gordhan, after he changed finance ministers twice in one week in December.