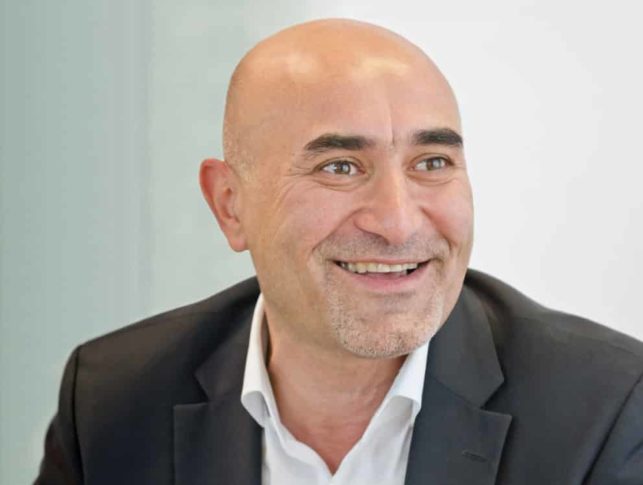 Born and raised in Aleppo, Syria, Ronaldo Mouchawar is the co-founder and CEO of the Arab world’s largest online shopping site and a pioneer of e-commerce in the region. He is also an eloquent symbol of a rising trend that’s seeing entrepreneurs reject the, if not saturated then busy, Western market, so long seen as the choice, in favor of using their expertise and innovative spirit to revolutionize and empower the market at home.

Originally trained in the West, Mouchawar was educated at Northeastern University, Boston, where he obtained a Bachelors in Electrical and Computer Engineering, and a Masters in Digital Communications. He also spent the early years of his career in the US working in technology and business management, including a role as technical and systems consultant at Electronic Data Systems (EDS).

But in 2000, he returned to the Middle East with a belief he could improve the Arab world by exploiting the empowering possibilities of technology. He first launched a consulting company managing web and e-commerce projects for the local Arab market, before in 2005 joining forces with Maktoob’s Samih Toukan and Hussam Khoury to launch online retail site and marketplace for third party sellers, Souq.com, just as the Arab world began to embrace technology and mobile.

A decade on, Dubai headquartered Souq.com, known as the Amazon of the Middle East, now operates in the UAE, Egypt, Saudi Arabia, and Kuwait, and ships to Oman, Qatar, and Bahrain, selling more than 400,000 products from consumer electronics, to fashion, household items, and babywear. And it is growing fast: in the last two years, Souq has expanded ten times over; and in 2014 it saw an annual growth of over 100%. The site sees 30 million unique visitors per month, of which more than 10 million are on mobile. And an app, launched in 2014, has now been downloaded around two million times. There are rumors that Souq is fundraising at a valuation of $1 billion.

It’s some success story. But Mouchawar still considers his company a startup. While in financial terms this cannot be considered true, he says: “If continuing to think of Souq as a startup helps us innovate, then great.”

Certainly, Mouchawar’s ability to innovate has been key to Souq’s success. Originally launched as an auction site modeled on eBay, he quickly redirected the company into a fixed price model, recognizing its potential in the Middle East. And while Souq.com may now superficially seem like a copycat-Amazon, Mouchawar has transformed that business model for the market: he has localized and arabized e-commerce.

For example, Souq.com has gone some ways to rebalance the disparity between the availability of Arabic content online (currently just 3% of all content) and the number of Arabic speakers around the world (around half a billion). Arabic content has become a Souq forte, as are localized promotions, partnerships, and exclusive products. Mouchawar has also adapted operations for Middle Eastern challenges. For instance, in Egypt, only about 10% of the population have credit cards, and in countries like Bahrain and Saudi Arabia, 60% of online purchases are still paid for via cash on delivery. Mouchawar has developed prepaid cards which can be purchased in real life (IRL) and used online. He has also overcome an underdeveloped logistics infrastructure by developing a Souq-owned local delivery system offering “last mile” deliveries to places with no mail service or postal address, along with investing in local logistics companies and building relationships with local couriers. Souq teams are also in place in the majority of Souq’s operating countries, to continually innovate local solutions for area-specific problems.

Job creation in the Middle East

But Mouchawar believes his e-commerce solutions can have even further reaching impacts: he believes that e-commerce can empower.

“We believed the Internet and e-commerce specifically could be an empowering tool to support SMEs, and help create a knowledge base economy where we employ as many people and create jobs, as our region needed it,” he says. “It could create badly needed jobs for young people and boost the businesses that are the backbone of Arab economies.” “Imagine the access a merchant can have from a street in Cairo to a customer base in Saudi Arabia, to the UAE. If we can connect all these dots, you will have an incredible customer base.”

The Souq.com website proudly reveals that it employs 1,000 people directly and has provided jobs for another 6,000 people indirectly through its networks of partners, suppliers, and couriers, “not to mention the 75,000+ sellers, many of whom have built their livelihood via the website”.

Unsurprisingly, Mouchawar has become one of the Middle East’s most prominent entrepreneurs, visible and accessible on the startup circuit, speaking at conferences, and looking to inspire where he can.