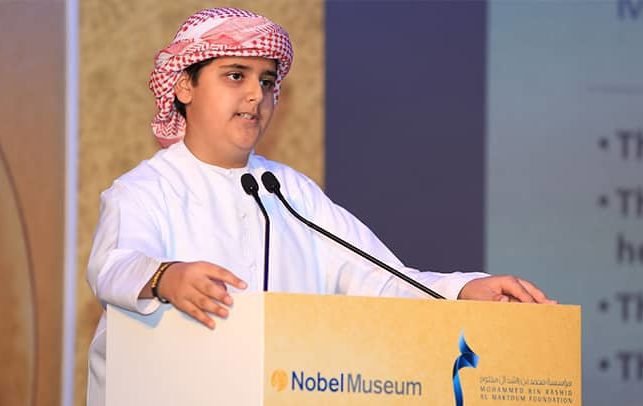 One of the youngest inventors in the world, an Emirati schoolboy is being prepared for a future providing technological solutions to the problems of people around the world.

Adeeb Al Balushi is an eleven year old Emirati boy like any other, yet in some ways he is quite unlike most other children his age. Al Balushi is a young boy who from early childhood has been driven by a desire to help people. This started with his family when he realized that his father was limited by the performance of his prosthetic foot. In an attempt to lessen his father’s discomfort he designed a light-weight, waterproof version of the prosthetic. With this success under his belt he invented a cleaning robot for his mother having noticed that her work around the house could be made much easier. Never one to be content to rest on his laurels, his ambitions are much wider ranging: he went on to create such things as a fire proof helmet whose camera system allows the wearer to see better in a fire, a smart wheelchair and a seat belt system with a built in heart monitor which wirelessly sends what could be lifesaving information to the emergency services.

“I want to change the world. There are too many people in need of assistance and all I think of is how I can be of help,” says Adeeb Al Balushi.

Shaikh Hamdan bin Mohammed bin Rashid Al Maktoum, Crown Prince of Dubai has been proactive in supporting the growth and development of young Emirati innovators in general, and Al Balushi in particular. In 2014, a world tour was organized to seven of the most technologically advanced countries in the world: the United States of America, France, United Kingdom, Ireland, Germany, Italy and Belgium. The purpose of the tour was to prepare Al Balushi for a future within the field of scientific research and in so doing help raise the profile of Dubai in the field. Conferences, workshops and meetings with leading innovators within the field were carefully planned, all the time ensuring that Al Balushi’s schooling would not be significantly affected by the tour.

The young inventor was recently invited to visit the headquarters of Thuraya, one of the world leaders in satellite telecommunication technology where he was shown the way the company also works tirelessly to bring solutions to problems; Al Balushi was provided a background to Thuraya’s efforts to bring satellite technology closer to the mainstream. Such products included the Satsleeve, a device enabling an ordinary smartphone to be used as a satellite phone, as well as the company’s IP+, which is extending broadband capabilities to areas which would normally not be able to connect to a network.

His tireless thirst for invention has led to a great deal of recognition for Al Balushi. He has been awarded the Hamdan bin Rashid Al Maktoum Award for Distinguished Academic Performance and has addressed thousands of delegates at the ITU conference in Korea. Adeeb Al Balushi is the youngest and most recognized inventor in the United Arab Emirates. He is also a member of the Arab Robotics Association, with over sixty certificates of achievement to his name; he is considered the youngest Arab inventor in this field. The year 2013 saw Al Balushi gain the UN Information Centre’s Award of Excellence, while the The Arab Youth Council for Integrated Development (Aycid) have awarded him honorary membership and named him the head of their committee for young inventors and innovators.

Al Balushi is obviously a very gifted young man with the support and mentorship of a state behind him. It is also clear that he is driven in his mission to help people the world over. The passion and the associated hard work are factors, the necessity of which is not lost on him, which he takes in stride.

“There are lots of paths to take through life, but the one that will ruin everything is to decide that it’s too hard and you give up. Then all is lost and everything you have accomplished is gone. Sometimes it’s the simple changes that can lead to the biggest discoveries,” says Adeeb Al Balushi.