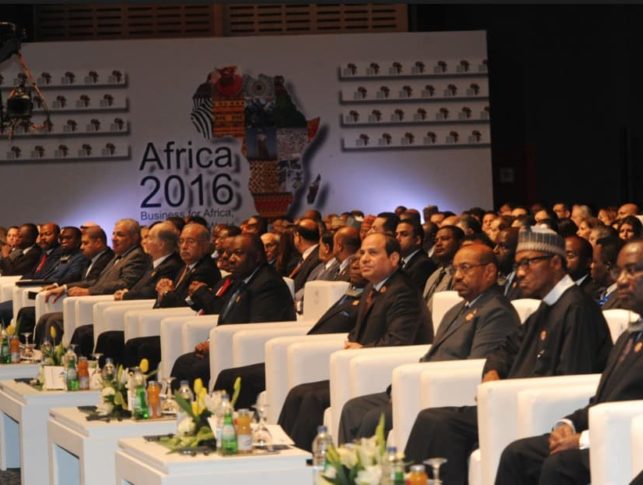 On February 20th and 21st, the Africa 2016 Forum took place at Sharm el-Sheikh, Egypt to address possibilities of investment and cooperation between African nations.

In an effort to boost international and regional trade and investment among African nations, Egypt hosted the Africa 2016 Forum in Sharm el-Sheikh over two days (February 20th-21st), the largest to have taken place in the area. Egyptian president, Abdel Fattah al-Sisi is hoping to strengthen ties with the county’s southern neighbors to fortify Egypt’s own economy while supporting those of their African counterparts and further co-operations, investments and business strategies were discussed at length as well as push the balance of trade to induce a more cultivated economy.

There were 5 African leaders who participated on the panel for the conference: Teodoro Obiang, President of Equatorial Guinea, Hailemariam Desalegn, Prime Minister of Ethiopia, Ali Bongo Ondimba, President of the Gabonese Republic, Muhammadu Buhari, President of Nigeria and Omar al-Bashir President of Sudan.

There was an impressive attendance of government leaders, heads of state, business investors and promoters, as well as heads of international organizations. There were 1500 delegates in total covering a variety of key sectors including energy, ICT, financial services, trade, agribusiness, pharmaceuticals and health.

What This Means for Egypt

With such an impressive turnout, Egypt is able to act as a catalyst for the continent. They have upwards of U.S. $8 Billion invested in Africa already and trade has risen by U.S. $5 billion. Al-Sisi is of course, looking for investment opportunities for Egypt but also to protect itself from the growth going on around them.

Ethiopia is constructing a damn on the Nile River which threatens Egypt’s water security- a resource pertinent to their agricultural economy, and one that, up until now, they were permitted unlimited access. The topic was discussed but the finer details remain unforeseen.

Ambassador Hazem Fahmy, head of the Egyptian Agency of Partnership for Development stated, “We have a lot of catching up to do, this is a start.

The conference also aims to connect the other nations; it had provided at platform for further investment opportunities for countries in the region, the rest of Africa and even internationally. President Sisi is aiming heavily for investment in education; he said “Young people are the focus of economic and legislative reforms that will accelerate investment”, and that “Crossing into the future requires taking into account the advancement of technology and paving the way for generations that have the capability to face current challenges”.

There are large projects in both the public and private sector with huge investment opportunity. The conference itself attracted investors which led to negotiations on business plans and investments throughout the conference. For example, Ahmed Heikal, founder and chairman of Qalaa Holdings discussed the possibilities of investment in the East African Rift Valley Railways and U.S. $3.7 billion refinery project in Egypt. In addition, the Tripartite Free Trade Area and the Suez Canal Hub were topics of discussion. No specific figures were released but agreements in the sectors of health, infrastructure and information technology took place.

It is no surprise that the consensus of the Africa 2016 Forum was further unified and shard goals when it comes to looking ahead into Africa’s future. It was agreed that there should be vital focus on human capacity and social development. The President of Equatorial Guinea, Teodoro Obiang Nguema pointed out the importance of integration between African countries, saying it is “the key point for our development”.

The policy makers need to work together with leaders and investors so they can see clearly the steps that need to be taken in order to optimize investment opportunity with current markets.

The African economy is growing and is expected to reach 5% in 2017, according to Akinwumi Ayodeji Adesina, President of the African Development Bank. Ethiopia’s growing economy is within the top 5 in the world and who’s Prime Minister stated at the conference “Today in our globalized world no country can achieve development in isolation”.

The result of the conference will hopefully not only break some of the national barriers and restrictions in Africa but also contribute to Africa’s presence within the Global Economy.

For the closing words, Hazem Fahmy, the Secretary General of the Egyptian Agency of Partnership for Development in the Ministry of Foreign Affairs said “One hand alone cannot clap”, showing the importance of the co-operation of African countries.