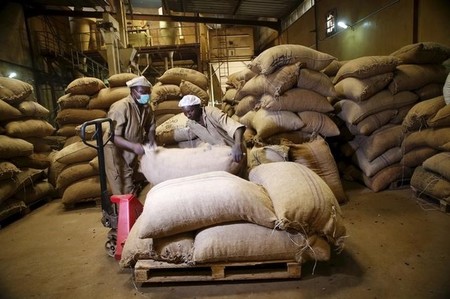 ABIDJAN (Reuters) – Economic growth in sub-Saharan Africa is likely to slip to 1.6 percent this year, its lowest level in two decades, due to continuing woes in the continent’s largest economies South Africa and Nigeria, a World Bank report said on Thursday.

Africa has been one of the world’s fastest growing region’s over the past decade, but a commodities slump has hit its oil and mineral exporters hard, bringing growth down to 3 percent in 2015.

However, other countries, including Ethiopia, Rwanda, and Tanzania, have continued to record GDP growth above 6 percent, according to “Africa’s Pulse”, the Bank’s twice-yearly analysis of economic trends.

The report, which was unveiled in Ivory Coast’s commercial capital Abidjan, also singled out Ivory Coast and Senegal as top performers.

Established and improved performers made up around a quarter of sub-Saharan Africa’s countries, are home to 42 percent of its people, but account for just 21 percent of economic output.

Meanwhile, 40 percent of African economies are struggling. They contain 36 percent of the continent’s population but contribute 62 percent of economic activity. Nigeria and South Africa alone account for half of output.

Despite a recent timid recovery in commodities, price are expected to remain below their 2011-14 peak levels, the report said.

As a result growth is projected to pick up slightly to 2.9 percent next year, the report said, and Africa’s economies are expected to expand by 3.6 percent in 2018.

However, government spending on Africa’s agricultural sectors is still lagging behind developing regions, despite making up a third of GDP and two-thirds of employment.

“But unleashing this productivity requires investing in rural public goods such as rural infrastructure, agricultural research, and use of improved technologies, as well as in availability of good data and evidence.”