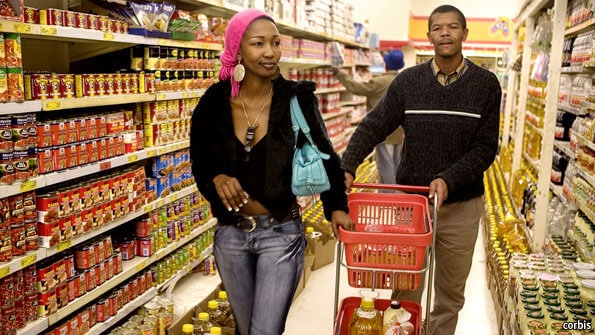 On October 15th, the CFAO – a specialized distribution leader and partner of major international companies – published a new, detailed study on consumption patterns in Africa. The conclusion was that the nature of the middle class is changing as it expands and that it could reach as many as 900 million people by 2040.

In recent years, the media has latched on to the notion of an increasing middle class in Africa despite there being a real lack of research in the area. This idea arose from the strong economic growth being experienced in a number of African countries. This has resulted in the construction of large shopping malls and supermarkets, increased housing ownership and increased access to information and communications technology.

Due to the size of Africa, as well as the cultural differences, religions and varied economies, defining the middle class can be quite difficult. To get around this problem the study was based on data accumulated from five countries, Kenya, Ivory Coast, Nigeria, Cameroon and Morocco.

What is the Future of the African Middle Class?

The African middle class is expected to continue growing rapidly. According to Jean-Michel Huet, one of those responsible for carrying out the survey, in 25 years the population of middle class citizens in Africa could exceed that of China and India combined. This is of huge interest to large Western countries who will see this an opportunity. If they can attain a significant share of such a large market, the revenues and profits earned could potentially be enormous. In a global economy still struggling from the economic downturn following the financial crisis, the continued growth of the African economy represents an important opportunity for Western countries and corporations.

The trend in recent years in Africa has been towards urbanization and much of the middle class can be found in the continent’s cities. However, increasing numbers of middle class people can be found in rural areas. Hélène Quénot-Suarez, a doctor of political sciences in Sub-Saharan Africa for the French Institute of International Relations has said that “African rural areas are also gradually experiencing the emergence of a middle class.” This is a trend that is likely to continue into the future.

A study conducted by the consultancy firm Deloitte in 2010 found that as the middle classes in Africa grow, people will have more recreational time. This combined with a better standard and higher level of education will result in people becoming more politically assertive. This presents further opportunities to western countries. Increasing education levels will mean greater access to a skilled workforce. When combined with greater levels of political activity this could lead to stronger democracies and free market economies being formed. This would make it easier for corporations from outside the continent to conduct business.