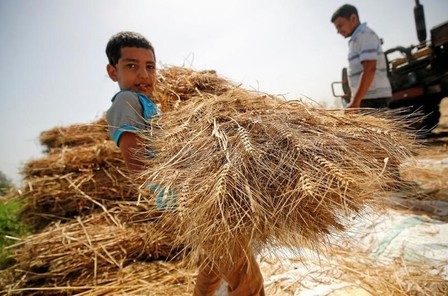 Egyptian quarantine authorities’ earlier refusal to let in wheat infected with even the slightest amount of ergot, a fungus that can lead to hallucinations and irrational behaviour in large quantities but at trace levels is deemed harmless to humans, wreaked havoc in the market for supplying the world’s largest wheat buyer.

The quarantine authority said a new ministerial decree would allow it to accept imported wheat shipments containing up to 0.05 percent ergot, finally ending a long-standing zero tolerance policy that has puzzled global trade.

“A ministerial decision was taken and 0.05 percent ergot tolerance will now be endorsed,” Ibrahim Imbaby, head of the quarantine authority told Reuters by phone.

Imbaby did not give more details.

The decision comes a day after the country appointed a new head for its state wheat-importing body — one of the most influential positions in the global wheat market, ahead of the impending import season set to start this month.

The resolution to the ergot row also comes as Egypt’s domestic wheat purchases are being questioned and the earlier announced 5 million-tonne Egyptian wheat procurement figure for the season could be revised, leading to a greater import need.

The country is in the middle of a government-led recount of locally purchased wheat after the unusually high local procurement figure of 5 million tonnes, as opposed to around 3.5 million tonnes in earlier years, prompted allegations of fraud from industry officials, traders and lawmakers.

If the local purchase numbers were misrepresented Egypt might have to buy more foreign wheat to meet domestic demand while contending with a dollar shortage that has already sapped the country’s ability to import, making a resolution to the ergot squabble ever more pressing.

The quarantine’s zero tolerance policy was at odds with the more commonly accepted international standard of up to 0.05 percent already endorsed by the ministry of supplies and state grain buyer, the General Authority for Supply Commodities (GASC).

“The ministerial decree was issued after a committee in the import and export surveillance authority was formed and pressurised the agriculture ministry to issue a new decree,” one Cairo-based trader said.

The affair, which resulted in several shipments of wheat turned away at ports, a sharply lower participation at GASC tenders and higher wheat prices, was thought to be finally nearing a resolution when Prime Minister Sherif Ismail intervened in late June and said the country would adhere to the common 0.05 level.

His comments were expected to be followed by a decree changing the old regulations that governed agricultural quarantines and stipulated a zero tolerance policy.

But a decree failed to materialise until Monday’s decision and the agriculture ministry has told Reuters it had been hampered by a months-old judicial order from the prosecutor general that had banned all ergot from entering the country.

The order had followed the rejection of a French wheat shipment belonging to trading firm Bunge late last year. The firm subsequently filed a lawsuit contesting the decision.

Imbaby did not make clear how that legal hurdle had been overcome.

And after months of conflicting statements from various Egyptian agencies, some European traders remain skeptical.

“We are being cautious….they’ve changed their position so many times over ergot,” one European trader said.