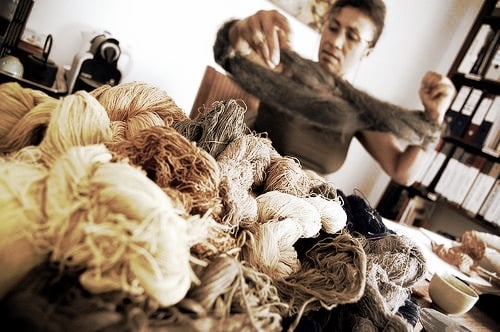 Dating back to the 15th century, Senegal has a tradition of textile weaving and dyeing as rich as the fabrics themselves. However, with a shift towards mass-produced clothing and the ever changing fashions and trends, this time-honored practice has suffered a huge set back. The name Aïssa Dione has become synonymous with the ancient craft, as she has fought to revive what was a tradition on the brink of distinction. “Spinning and textile industries have nearly all closed and traditional weavers are slowly but surely disappearing,” said the designer, a woman who has dedicated her life to reviving Senegal’s tradition.

Born to a French mother and Senegalese father in 1952, the renowned painter and textile designer grew up in Nevers, France. She attended the school of Fine Arts in Chelles before leaving to Senegal at the age of 20, to pursue an international career as an artist. Fate was to slightly alter her career course, when a potential buyer of her work, Pierre Babacar Kama, head of Chemical Industries of Senegal (ICS), said he would like first for his offices to undergo a revamp. It was “a bluff,” she said, when the budding artist responded confidently that she could manage such an undertaking.

This event marked the beginning of the entrepreneur’s textile and business adventure. Dione began with a single weaver who had worked for her grandmother. They set up their make-shift studio in her garden and she went to work, combining her artistic flare with traditional Senegalese weaving methods, such as the Mandjaque technique. The result was so impressive that many commissions were to follow. Local media interest sparked intrigue and soon her work was reaching a global audience, with orders flying in from all across the globe.

Aïssa Dione Tissus was officially launched in 1992. From its modest beginnings it rapidly grew from having a single weaver to 15 workers, prompting a move to a more suitable location. Still her place of work today, her now burgeoning artillery is situated in Rufisque, a small town outside Dakar in Senegal. The company employs 100 Senegalese artisans. Dione dreams of recruiting more and expanding her business further but in the meantime there are Senegal’s restrictive labor laws to contend with.

Passionate about her roots, what she has borrowed from the country’s tradition and methods, she has more than given back by celebrating all that is Senegalese through textile and showcasing it to the world. The company’s philosophy is one of slow industry; creating a refined, luxury brand from local raw materials. While the West African country exports 5,000 tons of cotton annually, none was previously leaving as finished pieces of textile; the entrepreneur is changing this trend. The products from Aïssa Dione Tissus are 100 percent made from Senegalese materials, created by a purely Senegalese workforce and traditional methods of dying and weaving that are still harnessed to this day. One example: the all-natural dyes they make out of local bark and mud collected from the lake during the dry season.

“I strongly believe in small-scale industries, as a way to bring development to West Africa. We grow a million tons of cotton in this region and we export 99% of that. If I can process that cotton here, at home, I can increase my revenue fifty or one hundred times,” said the elegant 62 year old.

The future for textile and art

What the statuesque designer has so masterfully achieved is introducing a social and economically aware business into the world of high fashion and design. She discovered how to elegantly blend the traditional with the modern and it is a roaring success. What had been slowly slipping into oblivion was rescued from the precipice and with just the right modern twist is made palatable for the current trends. Labels such as Hermès, Christian Lacroix and Fendi Casa have made orders from Aïssa Dione fabrics and designers such as Jacques Grange, Christian Liaigre and Peter Marino have all used her products.

Her passion, her drive and her determination to stick fast to her beliefs make the success of Aïssa Dione Tissus even more incredible. Many frustrations along the way could have tempted a less resolute person to take shortcuts here and there but that would have compromised too much of what this French-Senegalese artist and “Lioness of Africa” believes in.

One Response to Aïssa Dione: One woman’s fight for traditional Senegal textiles