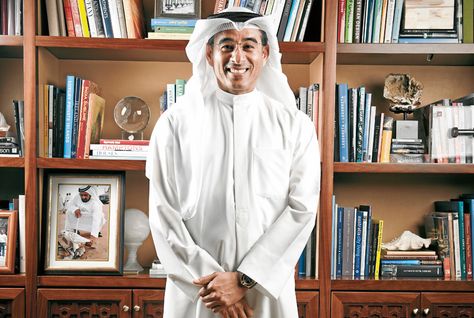 A new online shopping platform created in the United Arab Emirates is set to dominate the industry in the Middle East and possibly the world. Noon.com, which was announced early November, is an online retailer boasting over 20 million products and same-day delivery. Created by Emirati billionaire and businessman Mohamed Alabbar, the site will be launched worldwide in January, 2017.

Stocking millions of products ranging from fashion to electronics, food to cars, the site will be ten times bigger than the region’s current ecommerce site, Souq.com and will stock over 5 million more products than Dubai’s biggest malls. Starting with 20 million products, the plan is to get to 100 million, Alabbar explained in an interview with Arabian Business. Initially the site will sell popular consumer items, he explained, but will eventually expand to sell niche items too.

The region is ripe for an ecommerce revolution: Alabbar

With $1 billion in financial backing, half from Saudi Arabia’s Public Investment Fund and half from Alabbar himself and a group of Gulf Cooperation Council investors, the ecommerce site will operate from and focus on the UAE and Saudi Arabia before branching out. Noon’s head office will be located in Riyadh, Saudi Arabia

As a region with 50 percent of people under the age of 25, the UAE and Saudi Arabia have extremely high internet and smartphone usage as well as high per capita income Alabbar explained. However, ecommerce accounts for only 2 percent of total retail sales in the region, a total of $3 billion a year.

People in the Gulf nations are still buying online from Amazon US and Amazon UK even though they have to wait a long time for delivery, Alabbar said. Countries like the USA, China and the UK have an ecommerce penetration of 15 to 18 percent of retail, but it is negligible in the Middle East. “The region is all but ripe for an e-commerce revolution,” Alibbar said. “Local giants have emerged in ecommerce around the world, like Alibaba in China. Why should it be any different in the Middle East?”

By 2025 the ecommerce market is expected to be worth a whopping $70 billion a year, and Alabbar aims to take a sizeable chunk of it. Noon is being built with an eventual goal of an initial public offering in five to seven years Alabbar said. Immediate goals, however, include growing online sales in the region from 2 percent to 15 percent. A financial goal from $3 billion to $70 billion within a decade, taking up much of the ecommerce market.

“Any vision to change the world necessarily has to be big. A quantum leap cannot be small,” Alabbar said. An obvious comparison to Noon is Alibaba. When Alibaba was launched, Amazon was already a large public company, Alabbar explained. But that didn’t stop CEO Jack Ma from dreaming big. Today they are the largest ecommerce company in the world, and Amazon is almost non-existent in China, Alabbar said.

Noon plans on being an all-encompassing retail experience. From its website to an app, to delivery system and pay platform, it is all the same company from start to finish. Noon’s CEO and former country manager for Souq, Fodhil Benturquia said Noon’s edge over competition lay in its technological advances. “Our customer experience will be driven by state-of-the-art technology that will power everything from product discovery to purchase and delivery,” Benturquia said.

As well as creating its very own paying platform, Noon Pay, the company is also currently building the world’s largest warehouse adjacent to Dubai’s Al Maktoum International airport to store its products. The warehouse, which will be the size of 60 football fields will be one of many similar centers across Saudi Arabia and later across the entire region. Large storage centers mean same-day delivery is possible and this will be achieved via an in-house system called Noon Transportation and part-owned delivery service, Aramex. Noon is going to change the online shopping landscape for the Middle East customer, Benturquia said.