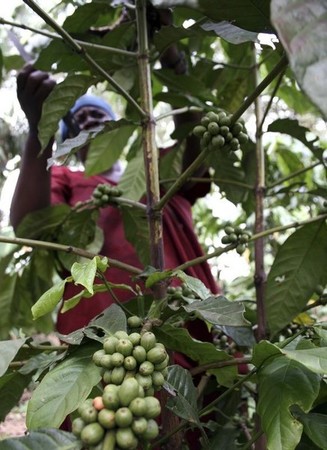 But David Muwonge, head of marketing at the National Union of Coffee Agribusiness and Farmer Enterprises (NUCAFE), said prospects were clouded by the twig borer beetle which was increasingly migrating to coffee farms as forest cover shrank.

He said some farmers had reported losing as much as 40 percent of their potential harvest as a result of the beetle, although he did not give a forecast for the overall impact.

“The biggest threat to coffee in Uganda is … the twig borer,” he said.

The beetle thrives in the drier conditions which have become more frequent in recent years and which have been partly linked to global changes in climate, Muwonge said.

First detected in Uganda in 1993, the twig borer makes tiny grooves on the twigs – the small branches that bear cherries – of coffee trees and lays eggs there. It then infects the twigs with a fungi which causes the leaves and twigs to wilt and die.

A 2013/14 survey by UCDA found that at least 40 percent of all trees in robusta growing areas had infected twigs.

Muwonge said the beetle mostly lived in dense forests where natural enemies controlled its population. But smaller forests and drier conditions meant “some of the (beetle’s) natural enemies have been eliminated” and it was migrating to farms.

He said pesticides had only a limited impact and many farmers could not afford the chemicals.

“It’s an existential threat to our coffee because we don’t have a cure as yet,” he said.

British charity Oxfam warned in 2008 that changing weather patterns in Uganda could leave much of country unsuitable for growing coffee within 30 years if temperatures rose 2 degrees or more.