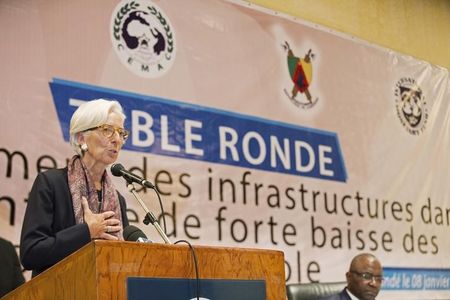 YAOUNDE (Reuters) – Tighter public spending, economic diversification and greater regional trade are needed to spur growth in central Africa that has been hampered by plunging oil prices and security threats, the head of the International Monetary Fund said on Friday.

Speaking in Cameroon during a regional tour, IMF managing director Christine Lagarde said growth in the resource-rich CEMAC bloc – comprising Cameroon, Central African Republic, Chad, Congo-Brazzaville, Equatorial Guinea and Gabon – slowed in 2015 to around 2 percent and will increase only slightly this year.

“The prolonged slump in oil prices presents a new reality for CEMAC,” Lagarde said. “An adjustment in large scale investment plans may be necessary in the short run, to preserve fiscal viability and debt sustainability in the medium term.”

Oil has dropped from over $100 a barrel in June 2014 due to global oversupply, to around $30 a barrel this week, which provides a challenge for countries in Central Africa whose economies rely largely on exports of oil.

Some have been hit harder than others. Equatorial Guinea experienced a “severe” contraction, Lagarde said, while Cameroon saw some robust growth.

Economies have also been hit by security concerns, particularly from Islamist militant group Boko Haram which has carried out attacks in northern Cameron and elsewhere, disrupting economic activity and diverting spending from social programs to the military.

An “ambitious” reform agenda will be needed to bolster growth, which is estimated at 2 percent for 2015, down from earlier estimates of over 4 percent, Lagarde said on Friday. The bloc’s fiscal deficit is seen to have widened 6.5 percent of GDP in 2015, with only modest improvement expected in 2016.

The block’s growth is expected to hit 3.5 percent in 2016, still far below the growth of previous years.

Lagarde urged CEMAC members to rein in spending to reduce deficits during tough times and increase regional trade. Of all formal trade conducted by CEMAC countries, less than 5 percent involves intra-CEMAC commerce, according to the IMF.