Tourist numbers to Dubai continue to grow in 2019 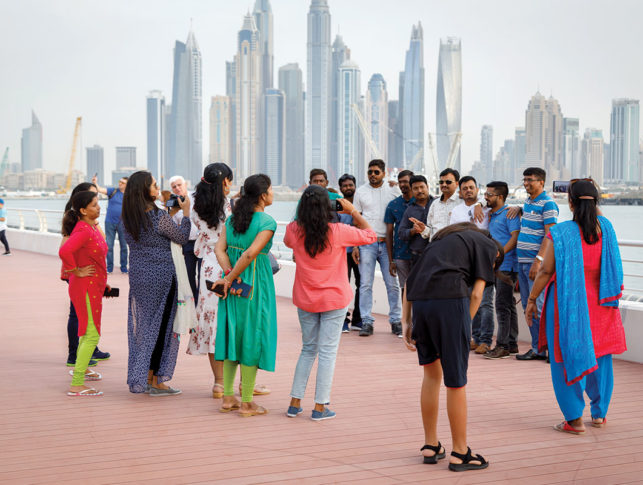 When you look at most cities in the world that serves as major tourist destinations, they tend to have long and illustrious histories. London and Hong Kong both have histories dating back 2,000 years or more, Luxor dates back over 5,000, and Athens some 3,500 years. But Dubai is very much a modern city in every way with little in the way of history, so it was very much a sandy tabula rasa for the rulers to write their ideas and dreams on.

Although Dubai has brief mentions in the annals of travellers and traders as far back as the 11th century, it was little more than a waypoint though the general area was popular for pearl fishers. The Al Abu Falasa dynasty founded Dubai proper in the early years of the 19th century and one early historical footnote of interest is the signing of the “General Maritime Peace Treaty” between several of the regions sheikhs and the British government which was the first formal denunciation of slavery in history.

In 1892, Dubai became a British protectorate, with tax exemption granted to foreign traders in 1894. By the early years of the 20th century, the Sheikh of Dubai had convinced a British steamship company to make Dubai a port of call, perhaps the first real hint of the city’s future. The merchant class gained strength with Dubai cementing its position as the main – and busiest – port in the Gulf, and they continue to be at the heart of the city’s political and power structures.

Dubai had a lean period between 1920 and the late 1960s with economic blows from the collapse of the pearl industry, the Great Depression, and World War II. This period was marked not only by poverty but by political unrest and instability.

Sheikh Rashid bin Saeed Al Maktoum became ruler of Dubai in 1958 and it was he who was the driving force behind the modernisation and revitalisation of the city. The United Kingdom’s announcement in the late 1960s that they were withdrawing protection led to the foundation of the United Arab Emirates in 1971 in order for the small kingdoms to work together in defence and economically.

But it was oil that was the real game-changer for the area but for Dubai in particular. With the discovery of oil in 1966 and the first shipment in 1969, the ruling family now had the funds to start realising their visions for the city.

Emirates Airlines has played a big part in the growth of Dubai. It operates over 3,600 flights a week from Dubai and the geographical location of Dubai has helped it become the major hub for many long-haul flights. The government saw that people looking to break up 15-25 hour flights offered huge potential tourism wise and billions of dollars were pumped into that area. They also realised that as oil production slowed down in the early 1990s – not to mention the constantly fluctuating prices – they need to diversify in order to survive and grow.

A New Record of 16.73 Million of Tourists

That diversification has seen Dubai become not only a major tourist destination but also a regional centre for finance and real estate. Its diversity is perhaps underlined by the fact that some 90% of its population are foreigners, with many seeing the rich emirate as an ideal hub for many types of businesses.

2019 was a record year, with visitor numbers rising 5.1% from the previous year to a new record of 16.73 million. India keeps its top spot of providing the most visitors, with just under two million tourists, and Saudi Arabia and the UK stay 2nd and 3rd respectively. Omani tourists saw the biggest jump with a 24.3% increase in visitors from 2019.

So why do so many tourists continue to flock to Dubai? As mentioned, a major factor is the city’s location combined with the routes flown by Emirates Airline. Many people initially chose to just have a one-day layover in the city to break up their long haul flights and to reduce the effects of jet lag. But now, the average length of stay is 3.5 to 4 nights, giving visitors an opportunity to sample some of Dubai’s many attractions.

And this is where Dubai excels. They have taken a hot and arid desert with average temperatures that range from 25 degrees Celsius to the low 40s and turned it into an air-conditioned paradise for tourists and expats. The magnificence of the Burj Khalifa and the splendour of the Burj al-Arab (the world’s tallest hotel) continues to wow visitors. The Dubai Mall offers a cornucopia of shopping and entertainment choices and the Dubai Aquarium attached to the mall is one of the city’s most popular tourist spots.

But not all the attractions are modern. The beauty of the Jumeirah Mosque is a must-see and the souks of Deira give a glimpse into Dubai’s merchant past. Ras Al Khor Wildlife Sanctuary is perfect for nature lovers and Kite Beach is ideal for those looking to soak up some rays or watch the spectacular kite-surfing.

Dubai is a destination that offers something for everyone – if you can afford it – and numbers will likely continue to grow throughout the coming decade.

Business, Featured Tourist numbers to Dubai continue to grow in 2019