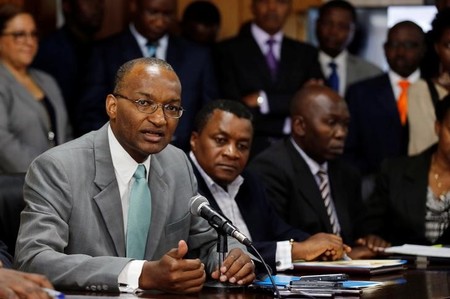 NAIROBI (Reuters) – Speculators against Kenya’s shilling in the run-up to national elections should “chill”, and a fall in its foreign exchange reserves is no cause for alarm, the head of its central bank said on Tuesday.

The bank’s hard currency reserves dropped to $7.80 billion – or 5.2 months of imports – last week, and traders said the central bank had sold dollars in the market at least twice since Thursday to support the local currency.

“We believe that our (reserves) cover is adequate,” Njoroge said, adding that some of the recent pressure on the shilling was due to bets on the outcome of the election, which takes place on Aug. 8.

“There is a lot of speculation out there… and frankly some of those speculators need to chill,” he told a news conference at the central bank.

Elections can be fraught and tense occasions in Kenya. The most recent one in 2013 passed relatively peacefully, but violence following the previous ballot in 2007 killed around 1,200 people.

Central bank currency reserves reached at record $8.27 billion at the end of May, central bank data showed. Given the drop since then, traders have expressed concerns about the bank’s ability to intervene further to support the shilling should the need arise.

The Kenyan currency has been broadly stable against the dollar this year and Njoroge said this trend should continue as inflation eased.

He said he expected annual inflation to drop into the government’s preferred band of 2.5-7.5 percent within two months as food prices continued to fall.

Headline inflation raced to a five-year high of 11.7 percent in May following a drought, but it fell to 9.21 percent last month after rains boosted supplies.

“We expect (inflation) to breach 7.5 (percent) within this quarter,” the central bank head said.

He linked the fall in currency reserves to government payments of just over half a billion dollars that were included in the budget.

Njoroge said concerns about the recent closures of at least 10 bank branches by Barclays Kenya and other lenders was “overblown,” saying technological innovations such as mobile phone banking were reducing the need for physical branches.

“We cannot just be stuck on brick and mortar,” he said.