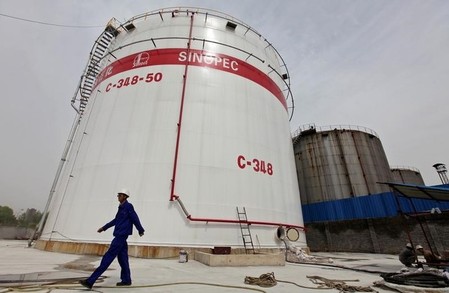 By Jessica Resnick-Ault and Florence Tan

NEW YORK/SINGAPORE (Reuters) – China’s Sinopec is nearing a deal to buy Chevron’s South African oil assets for up to $1 billion to secure its first major refinery on the continent, several people familiar with the matter said.

China Petroleum and Chemical Corp, or Sinopec, Asia’s largest oil refiner, was the last bidder remaining, and close to a deal with Chevron after an auction that spanned more than a year for its refinery, retails business and storage terminals.

The South Africa government’s desire to keep the refinery operating has nevertheless proven to be a major stumbling point for buyers who would prefer to convert the site into a more profitable storage terminal, sources said.

Sinopec is in discussions with the government on ways to keep the 110,000 barrels per day refinery in Cape Town running, but talks could still fail, sources said.

The sources declined to be identified because they were not authorised to discuss the matter publicly.

Chevron spokesman Braden Reddall said “the process of soliciting expressions of interest in the 75 percent shareholding is ongoing”. Plans to sell the stake in the South African business, including the Cape Town refinery, were first announced in January 2016.

Besides the refinery, Chevron has interests in a lubricants plant in Durban on the east coast, storage tanks and a network of Caltex service stations, making it one of South Africa’s top five petroleum brands.

Financial advisor Rothschild & Co is helping Chevron on the sale of the assets.

The remaining 25 percent interest is held by a consortium of Black Economic Empowerment shareholders and an employee trust.

(Additional reporting by Ron Bouss and Dmitry Zhdannikov in London, Joe Brock in Johannesburg and Chen Aizhu in Beijing; writing by Anshuman Daga; editing by Kenneth Maxwell and Susan Fenton)