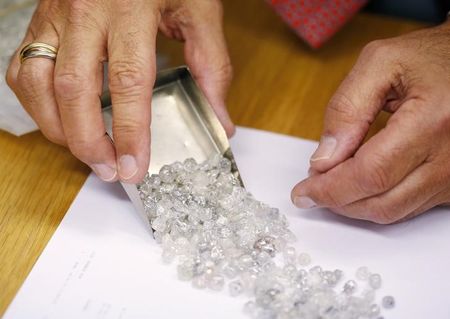 JOHANNESBURG (Reuters) – Diamond miner De Beers said global diamond jewellery sales grew by 3 percent last year to a record of over $80 billion, helped by strong demand in the United States, but warned 2015 will be tough for the industry.

De Beers said sales of polished diamonds rose 7 percent in the United States, while demand in China and India grew by 6 percent and 3 percent in local currency terms, respectively.

“Growth would have been almost five percent had it not been for the strengthening of the U.S. dollar against the currencies of several of the major diamond consumer markets in the latter part of 2014,” De beers said in a report.

The company, a subsidiary of global miner Anglo American, warned growth would be muted in 2015 as the strong dollar and an economic slowdown in China weigh.

De Beers chief executive Philippe Mellier said many industry participants started the year with more inventory than planned due to weak demand for diamond jewellery at the end of 2014.

“This led to a period of ‘indigestion’ in the diamond value chain and as a result we expect 2015 as a whole to be a more challenging year,” Mellier said.

De Beers said global rough diamond production fell by 3 percent in volume terms in 2014 to about 142 million carats, remaining well below the 2005 peak of around 175 million carats.

The company said expected output from expansion projects currently under way in the sector would lift total carat production to levels similar to the mid-2000s.