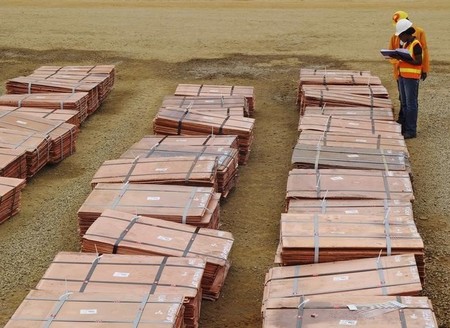 KINSHASA (Reuters) – The central bank of the Democratic Republic of Congo has slashed its GDP growth forecast for 2016 to 5.3 percent, compared with 6.9 percent last year, as a slump in commodity prices batters its mineral-dependent economy.

The central bank statement obtained by Reuters on Monday did not give details as to what was behind the revision. Congo has suffered from falling prices in its key mineral exports, including copper, cobalt, tin and diamonds.

Its previous estimate in April projected growth at 6.6 percent for this year, itself revised down from 9 percent earlier. The latest estimate brings it closer to the IMF forecast, currently at 4.9 percent.

Congo, Africa’s biggest copper producer, relies heavily on raw materials, which account for 98 percent of export earnings. After bouncing back at the start of the year, copper on the London metal exchange fell by a quarter last year, and has fallen further in 2016.