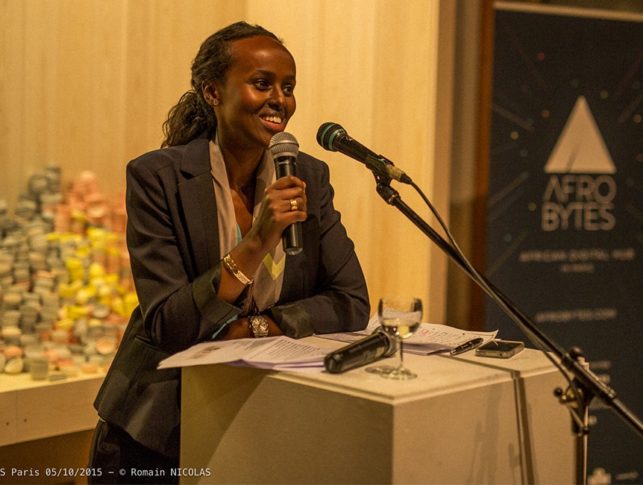 Afrobytes, the first diaspora for African tech innovators, held a biannual conference on March 21-22 to discuss the future of development and role of technology for Africans.

Diasporas are common the world over but as the rigidity of nations and states disintegrates with the expansion of technological inclusion, the shape of diasporas is shifting. No longer are diasporas defined as concentrated groups of immigrants/non-native individuals in another country. Afrobytes, the self-described “first African tech diaspora in Europe,” aims to connect leaders in African innovation across the European and African continents to create a better flow of ideas. This sort of boundary-less platform is an intriguing look at the future of diasporas and the future of development.

Paris-based Afrobytes held its first conference on March 21-22, organized by CEO Ammin Youssef, and Head of Communications Haweya Mohammad. The goal of the conference was to bring the brightest minds from France (and greater Europe) and Africa together to discuss the future of Africa’s development. The conference was broken into four categories: mobile education; women as Africa’s future innovators; sustainable infrastructure development and sustainable agricultural development.

Featured speakers hailed from all corners of the globe with all varieties of expertise, from the founder of Libraries without Borders to the PR Manager of WeFarm, from the founder of an open source drone company, Flylab, to the creator of Nairobi’s premier co-working space, iHub. This enormously diverse group of speakers came together to discuss the best way to promote inclusive, sustainable, bottom-up development for the African people.

Inspiring Change: The Themes of the Day

The idea of “re-branding” Africa was a driving force behind the selected themes: after all, without investment, how can Africa develop outside of the traditional and increasingly obsolete top-down model? Re-branding Africa as a well-educated, innovative, inclusive (55% of speakers and attendees identified as women) and multi-faceted sustainable market is important for the future of the continent.

As all conferences on development must, Afrobytes kicked off with a half-day dedicated to the discussion around the role of technology in education. Experts in information-sharing were featured speakers, and topics ranged from traditional, school-based education to the borderless open-source sharing of the WeFarm platform. WeFarm, for example, connects more than 43,000 farmers from Sub-Saharan Africa and South America to share tips on sustainable agriculture near and far.

The next theme was women as the emerging innovators of Africa. While hardly new, the idea that women should be encouraged to think critically, listened to and seen as mentors is new to many, African and otherwise. The primarily female speakers gave lectures on connecting with commercial investors, utilizing co-working spaces, both physical and on-line, and more.

On March 22nd, discussions surrounding Africa’s next “raw material” focused on the necessity of providing African’s with 21st-century-standards of living, including universal access to reliable (and ideally renewable) sources of electricity. The challenges facing the start-up culture and overall clean energy sector were discussed, including a talk by leaders in existing sustainable agriculture initiatives like founder and CEO Abdoulaye Niang of Transconcept Food, Senegal, a company that specializes in the re-appropriation of traditional farming techniques for the modern world. GreenTec Capital spoke to the diverse group, saying “a lot of work is still to be done to support the African start-up environment, and we are thankful for initiatives like Afrobytes.”

Why an Online Diaspora?

The population of Africa is expected to double by 2050 to 2.5 billion, or one-quarter of the world’s projected population. Unless living conditions rapidly improve for millions of Africans, this level of population growth could prove disastrous. According to the African Economic Outlook, “despite progress, the level of human development in Africa remains low….gender inequality and exclusion exist in many countries,” which is exactly why the sorts of dialogue inspired at Afrobytes is so critical. Not only is Afrobytes an inclusive platform that provides women and men equal space to voice their ideas, but it is an important step away from traditional forms of top-down (or government-led) development.

More than three-fifths of Africa’s population is under 25 years old. These individuals have grown up with greater access to knowledge than any generation before, and are therefore more driven to change their surroundings because they are aware, to a painfully precise degree, of what they are missing out on in comparison to their foreign counterparts. The way in which Africa is developing demonstrates the importance of the free-flow of ideas between continents.

By inviting speakers from different physical diasporas, such as the Kenyan ambassador to France, Afrobytes has given its online diaspora a real sense of physical community. Eric Yoon of GreenTec Capital expects “Afrobytes to become an important platform for digital stockholders on the African data scene.”