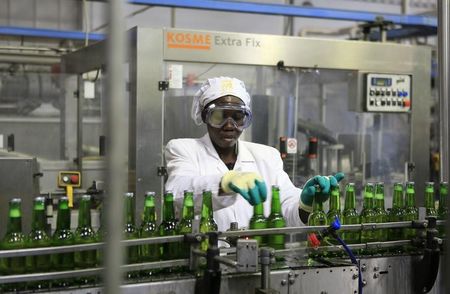 NAIROBI (Reuters) – Kenya’s East African Breweries Ltd (EABL) expects a hike in beer excise duty to hit demand in its home market in the coming months and will raise output of a lower-taxed cheap brand in an attempt to offset the impact, its CEO said on Friday.

Last month, Kenya lifted the excise tax by 43 percent to 100 shillings ($0.9785) per liter of beer, driving up retail prices by at least 20 shillings per bottle.

“Kenyan consumers are incredibly price sensitive so moving up by 20 shillings is a big deal,” said Charles Ireland, group CEO of EABL, which is controlled by Britain’s Diageo.

The hike in excise duty, designed to shore up government revenues, was the first one in four years.

“I would prefer that we saw a more regular increase which was smaller rather than an irregular increase, which is bigger, because I think the impact for consumers and the trade would be more manageable,” Ireland said.

EABL plans to boost the output of its cheaper Senator Keg beer, which is taxed at a rate of 10 shillings per litre, to offset the impact of the taxes on mainstream and premium beers.

Sales of Senator Keg, which is dispensed in mugs from barrels in bars, recovered during the company’s fiscal first half to December, after the government rowed back on a 2013 decision to tax it at the same rate as mainstream beers such as Tusker.

“We have got some additional capacity coming online so we will be able to sell more Senator into the market in the (fiscal) second half,” Ireland said.

Beer exports into South Sudan, which plummeted 74 percent in the first half due to civil conflict, were not expected to rebound soon, the chief executive said.

“The outlook is bleak. I don’t think that South Sudan will improve in the short-term,” he said.

EABL boosted its interim dividend by a third, as net debt fell and the company generated more cash, and Ireland said it would keep rewarding shareholders if profit growth was maintained.

“I hope it will continue, and if it does, we will be kind of looking to make sure our shareholders benefit from that performance,” Ireland said.

“We are getting into a decent shape from a balance sheet perspective.”