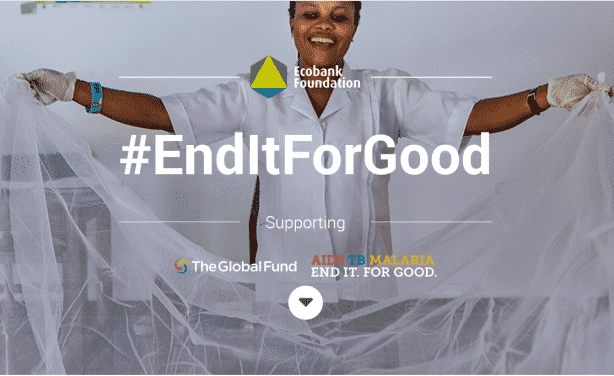 The Pan-African bank, Ecobank, recently committed a further 3 years of funding for its work with the organization the Global Fund, in the battle to fight AIDS, Malaria and Tuberculosis (TB) in Africa. Ecobank first partnered with the Global Fund in 2013, and at a signing ceremony in Montreal, Canada, the bank confirmed its additional funding for the various projects that target 3 of Africa’s most deadly diseases.

The Global Fund is an organization committed to ending the epidemics of AIDS, Malaria and TB, and it works closely with governments and the private sector to help fund initiatives to combat these diseases in over 100 nations. Although the body is committed to its cause on a global scale, it is Africa that suffers the most from AIDS and Malaria in particular, and as an African enterprise, Ecobank has shown that it views the battle as part of its responsibilities.

The Ecobank Foundation is the branch of the bank responsible for funding social programs across Africa, and Ecobank CEO, Ade Ayeyemi, pledged that a further $3 million of funding would be made available to the work that the Global Fund is carrying out within the continent. Funding from the Global Fund has provided 659 million mosquito nets to families, given TB treatment to 15.1 million people, and provided antiretrovirals to 9.2 million HIV sufferers.

Ecobank operates across 35 African countries, and its goal of bringing greater prosperity to African people is one that clearly involves the support of health initiatives. Philip Chikwuedo Asiodu, Chairman of the Ecobank Foundation, says, “Access to quality health care for all is vital to the growth and prosperity of Africa…we are proud to be partnering with the Global Fund in combating these three diseases throughout Africa.”

It is evidently essential to reduce the number of people suffering and dying from treatable diseases, in order to create an environment that allows people to improve their economic situations. While some of the tools needed for fighting 3 of Africa’s biggest killers are obvious purchases, such as mosquito nets, it is also necessary to help nations organize their use of funds. The Ecobank Foundation joined with the Global Fund to help countries not only receive greater funding for health schemes, but to manage their funds more effectively.

Support was provided to grant recipients in Nigeria, South Sudan and Senegal over the past 3 years, and it is great news for ongoing projects that Ecobank has committed itself to at least 3 more years of backing.

The Ecobank Foundation CEO, Julie Essiam, signed the extension to their partnership with Global Fund with the Executive Director of Global Fund, Mark Dybul.

Essiam expressed excitement about the continued collaboration, calling it “a historic moment with the Global Fund” and explaining their shared goal “to create a ‘thriving Africa’, and a prosperous continent.”

It is to be hoped that such partnerships encourage further investors to help support changes that the whole of Africa, and the wider world, will benefit from.