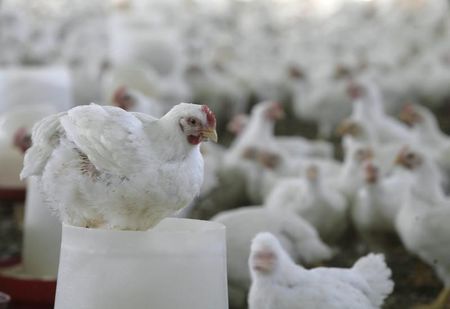 CAIRO (Reuters) – Egypt will stick with buying its poultry domestically, turning its back completely on international tenders and bowing to pressure from its local producers, traders said on Monday.

The ministry of supplies said it will sign a protocol on Tuesday with the Egyptian Poultry Association to supply chicken at government cooperatives, just two weeks after holding its first-ever international tender for poultry.

Earlier this month the ministry said that Egypt’s state buyer, the General Authority for Supply Commodities (GASC) would import a broader array of essential items, including poultry and meat, in order to counter rising prices.

Egypt’s urban consumer inflation jumped to 9.7 percent in October on the back of rising food prices. Earlier in the month President Abdel Fattah al-Sisi said the government would take action to counter price increases.

GASC’s decision to tender for poultry upset local industry, which then offered to match the prices offered by companies that had submitted bids in the tender, one trader said.

Egypt’s local press reported last week that an offer from a U.S. company had been accepted to supply 500 tonnes of poultry, but GASC has yet to announce details of the deal, leading many traders to believe it would be canceled.

The decision to instead procure poultry locally raises questions over whether the importing body will be able to expand its mandate without running into fierce resistance from local industries that employ thousands of workers.