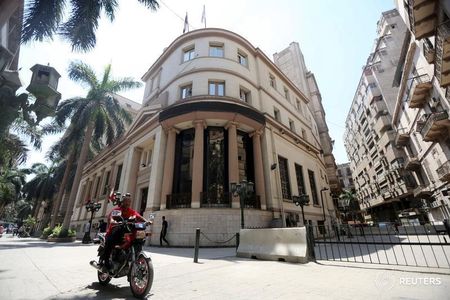 CAIRO (Reuters) – From bankers to carmakers, Egypt’s business community will breathe easier when Tarek Amer takes charge at the central bank on Friday, with hopes high he will revamp a monetary policy that has undermined investment and growth.

Announced last month, the leadership change unleashed anger against outgoing governor Hisham Ramez, who capped dollar deposits at $50,000 a month, starving businesses of hard currency and paralysing trade as he sought to defend the country’s pound.

Amer, the well regarded former head of commercial lender National Bank of Egypt (NBE), has already been working hard behind the scenes to inject fresh funds into a sclerotic financial system, and he is widely expected to lift the cap.

But with inflation high and the pound propped up by unsustainable central bank dollar sales, he will also need to tread a fine line between allowing the currency to settle lower while avoiding the sharp devaluation that would worsen the imbalances he is trying to correct.

“There is a belief that Tarek Amer will cancel the cap on dollar deposits at banks,” said an under-the-counter currency trader. “There is an optimistic atmosphere among clients of exchange companies and in the parallel market.”

Black market traders, bankers and businesspeople also expect Amer to work with the government to dampen demand for dollars by regulating imports and supporting exports — a source of hard currency battered by the capital controls.

Egypt’s economy has struggled since the 2011 uprising that ended Hosni Mubarak’s 30-year rule drove away investors and tourists, robbing it of foreign currency and putting the pound under severe pressure.

Fearing runaway inflation, the central bank has maintained the pound within a narrow band, but pressure has persisted.

In February, Ramez imposed the deposit caps and forced banks to prioritise food and medicine when supplying scarce dollars.

But the measures made it hard for companies to get credit to pay for imports and, as goods mouldered at ports and some factories stopped production, exports slumped by 19 percent in the first nine months.

To the business community’s relief, President Abdel Fattah al-Sisi announced in October that Ramez would not renew his term as governor when it expired on Nov. 26.

“As long as in the central bank of Egypt there are people who are managing wisely… you should never have a foreign exchange crunch,” Raouf Ghabbour, chief executive of GB Auto, told Reuters in a recent interview.

Within two weeks, banks had supplied $1.8 billion to clear the import backlog. [ID:nL8N12Y3D0]

Amer’s next move came on Nov. 11, when the central bank strengthened the pound by 20 piastres and supplied $1 billion to banks to cover 25 percent of dollar overdrafts they had opened for companies.

“The market expects the central bank to increase the value of the pound by 10 piastres in the first (dollar) auction under Tarek Amer,” he told Reuters. “There are expectations for a big surprise.”

Expectations of change received a boost on Thursday, when Farouk al-Okda was appointed to a central bank committee of government ministers and economic experts tasked with setting the monetary agenda.

Okda, who led the central bank from 2003-2013, was credited with helping stabilise the pound within a managed floating exchange rate, and helping establish an interbank foreign exchange market that helped curtail the black market.

“The central bank is semi-independent but in these circumstances it will have to work hand in glove with the (government)… to come up with solutions,” said Angus Blair, chairman of Signet Institute, an economic think tank.

While an eventual devaluation looks unavoidable, turning around Egypt’s monetary policy will be a tricky balancing act.

An emerging market rout has left the pound overvalued, despite a depreciation of about 10 percent this year. Yet a sharp devaluation would stoke inflation in an import-reliant country where millions live hand to mouth, fuelling the kind of street protests that helped unseat two presidents in three years.

The government announced this week it would control the prices of 10 essential commodities — a move some read as an effort to protect vulnerable Egyptians from inflation unleashed by an eventual devaluation.

In the meantime, reforms to address the ballooning trade deficit could strengthen the economy ahead of any shocks.

Egyptian Federation of Industries head Mohamed El Sewedy told Reuters recently he expected the government to implement an indicative pricing mechanism for imports before the end of the year, curtailing the common practice of avoiding customs duties by undervaluing imports on bills.

“If I regulate trade, the appetite for dollars … will become more orderly,” said El Sewedy, adding that Amer had promised to cover the remaining $3 billion of banks’ credit exposure.

Egypt’s benchmark overnight lending rates are already high at 9.75 percent, but with foreign reserves languishing at $16.4 billion – enough for just three months of imports – economists believe borrowing costs will have to rise further to avert inflation and dollarisation. The victim of high rates could be much-needed growth.

“It’s a lot to do for a new central bank governor,” said Blair. “I don’t envy him but it is a great shame he wasn’t appointed earlier.”