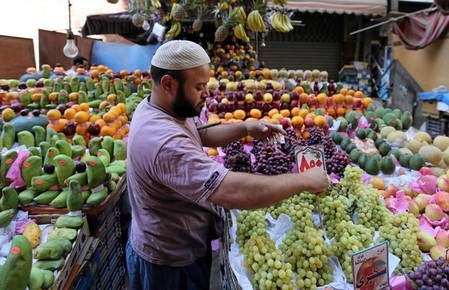 It was the fourth consecutive jump in inflation since the central bank abandoned its currency peg to the U.S. dollar on Nov. 3 in a dramatic move that has since seen the currency depreciate roughly by half.

Urban consumer price inflation had reached 28.1 percent in January year-on-year. The February number is the highest level since November 1986, when it reached 30.6 percent, according to Reuters data. (for chart click on http://reut.rs/2mExYx8)

Monthly urban consumer inflation eased to 2.6 percent in February from 4.07 percent in January.

The central bank accompanied the float with a 3 percent interest rate hike to fight price pressures but inflation has jumped over the past four months and is expected to climb further this year as the government pushes on with economic reforms, including fuel subsidy cuts.

“We expect headline inflation to remain elevated at similar and higher levels until Q4 2017, at least, as the pass-through effect from the higher FX rate continues, albeit at lower levels,” said Reham ElDesoki, senior economist at Arqaam Securities.

On Tuesday hundreds of Egyptians protested around the country, blocking roads and surrounding government offices, after a change to the way bread rations are managed raised fears that the government was cutting food subsidies by the back door.

“The prices are very expensive, nothing is getting cheap. People are buying much less, instead of 2 kilos, they get 1.5, tightening the belt until things get better,” Abdullah Mohsen, a vegetable seller at a market in Cairo on Thursday.

“Traders have hiked up the prices of the vegetables we buy in bulk, and it’s unimaginable. I’ve never heard of aubergines or beans selling for these prices,” he added.

Some economists expect the rising inflation to erode spending power, hit economic growth and prompt further hikes to interest rates, which are already up to 15.75 percent.

Egypt’s central bank has held interest rates steady at three monetary policy meetings since the flotation and some economists expect further rate hikes this year. The central bank’s monetary policy committee is due to meet on March 30 to decide on its key rates.

IMF mission chief for Egypt Chris Jarvis said in January the fund expects inflation to begin dropping sharply by the second quarter of 2017.