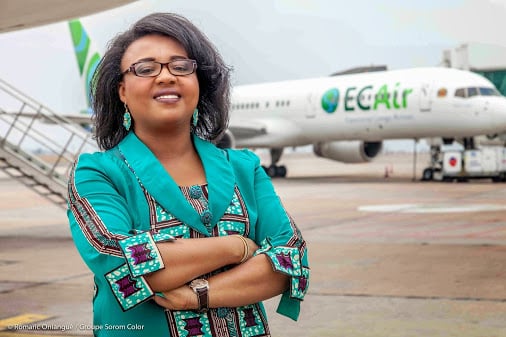 The African aviation market is becoming one of the most significant in the world thanks to its growing middle class, which now makes up over 35% of the population. African air traffic is growing by 5.2% per year. Fatima Beyina-Moussa is 41 and a mother of 2 children. Ask her if she dreamed of being the CEO of an airline and changing the African airline industry and you will elicit a hearty laugh from Ms. Beyina-Moussa. The quick and honest answer is an emphatic “No”. She mentions several other things she dreamed of and the academic track that she trained in, but none of them involve air transportation and helping lead a revolution in travel by air in Africa.

Born in Dakar, Senegal, where her father, Pierre Moussa, studied and taught at the University of Dakar in the area of planning and development alongside Prof. Samir Amin, Fatima’s thoughts on her path in life mirrored her father’s career more than anything. Pierre Moussa was born in Owando, located in northern Congo-Brazzaville, in 1941. He is considered a man gentle in nature, married, and a father of 4 children including Fatima.

Before the Daughter, the Father

Pierre Moussa, Ms. Beyina-Moussa’s father, is an economist by training and a politician in the Congolese government. He started his government career in 1978 as Secretary-General of Planning. President Denis Sassou Nguesso promoted Moussa to Minister of Planning in 1979, the same year he joined the Central Committee of the Congolese Labour Party (PCT). The PCT selected Moussa as Secretary for Planning and the Economy in 1984. He climbed to the role of Minister of Planning and Finance in August of 1987. Moussa is considered “the regime’s economist”, and joined the PCT Political Bureau in 1989, taking on the responsibility for planning and the economy; he was promoted to Minister of State for Planning and the Economy in the Congolese government in 1989. Pierre Moussa is now President of CEMAC, the Commission of the Economic and Monetary Community of Central Africa. His 5-year term appointment was announced at the 11th Summit of CEMAC Heads of State in 2012 at Brazzaville.

Fatima has inherited much from her father, including the role of an economist and interest in development and planning. Her post-secondary school education has focused on economics and finance, primarily in Canada, where she received her Bachelor’s degree from the prestigious HEC Montreal. She then received her MBA from the University of Ottowa, pursuing specialized studies in the USA and France as well. Not only is she keenly aware of issues in Africa, but she is also aware of how Africa interfaces with the rest of the world. As a black African woman, Beyina-Moussa is a pioneer in her field, and her actions and opinions are followed with much interest. As she takes the pulse of modern Africa as one of its business leaders, she is also someone that drives that pulse with her ideas and decisions.

Beyina-Moussa started her career as a consultant at Ernst & Young in the Congo. She advanced to the role of a consultant at the official Bank of Central African States (BEAC), then moved to New York City, working for the United Nations Environment United for Development (UNDP). Her rise, professionally, was quick but not entirely unexpected. In the Congo, she took on the job as an advisor to the economy and to reform the Congolese Ministry of Finance, Budget and Public Portfolio. Beginning in 2007, she worked on establishing a national air carrier to advance the Congo’s transportation industry and its economy. Success has been quick and in 2011, Fatima Beyine-Moussa was appointed Director/CEO of the national airline of the Republic of Congo, Equatorial Congo Airlines (ECAir). Shortly after her hiring as CEO of ECAir, Fatima was selected as a member of the Executive Committee of African Airlines Association (AFRAA) in 2012. In November 2014, Beyine-Moussa was appointed Chairwoman AFRAA and recently completed her 1-year term at the 47th General Assembly of AFRAA from November 8th-10th, 2015 in Brazzaville.

Fatima Beyina-Moussa is embracing her role as a favorite and influential daughter of Africa. She has plans and a clear view of how she wants Africa to evolve now and in the future. One that she is fervently working on now is travel between cities and countries within Africa. Currently, it can be easier to fly out of the continent, take a connection in Dubai or Paris, and fly back into Africa. Beyina-Moussa is working on a plan to avoid this and make travel within Africa easier and more beneficial for airlines and passengers. Connections between African countries are insufficient, and there are not enough round trips, making travel difficult. With Beyina-Moussa working on this, it is without doubt a job that will get done. In her words, “We have only just begun.”