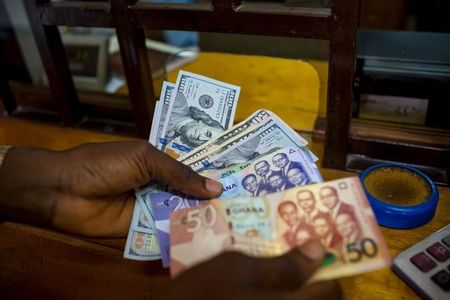 ACCRA (Reuters) – Ghana’s annual consumer price inflation fell to 18.5 percent in February from 19.0 percent the month before, helped by the stability of the local currency, the statistics office said on Wednesday.

Consumer prices could fall further if the cedi holds steady and in the absence of any external shock, deputy government statistician Anthony Amuzu told reporters in Accra.

After weakening nearly 4 percent in January on seasonal high corporate dollar demand, the cedi, has remained firm in recent weeks. It was trading at 3.8500 to the greenback on Wednesday, down 1.3 percent year-to-date.

“The stability of the cedi was the major driver in February,” Amuzu said, adding that it drove down prices of imported items.

The commodities exporter is implementing a three-year aid programme with the International Monetary Fund (IMF) in an attempt to remedy fiscal problems including inflation persistently above government targets.

The IMF projects that inflation will peak before slowing to around 10 percent at the end of the year and the central bank has been tightening monetary policy in order to contain it.

Analyst say the easing in February CPI showed that the central bank’s tight monetary policy had been effective.

“The deceleration in year-on-year inflation also relieves the pressure on the Bank of Ghana to raise interest rates in the near term,” said Standard Chartered’s head of Africa research Razia Khan.

Year-on-year non-food inflation for February, which comprises imported goods, was 24.5 percent, compared with 25.5 percent the month before. Food inflation was 8.3 percent, from 8.2 percent in January.