Africa is home to a rapidly-growing tech startup scene. From 2015 to 2020, the number of African startups receiving financial backing stood at over 6 times the global average. Thanks to hosting the world’s largest free trading area and a young, growing population that makes use of new technology like e-banking and mobile phones to leapfrog traditional development pathways, the tech startup sector grew by about 46% a year. For the continent to truly become a launch pad for innovation and for the tech sector to maintain its stunning growth trajectory, it will need some help.

An increasingly attractive continent for investors

For any startup, obtaining early-stage funding is crucial, and entrepreneurs often seek external investment to raise this. Historically, venture capital on the continent has been limited, however this is changing. In 2014, only 70 venture capital deals were recorded in Africa, while by 2020 this had risen to over 300, with around a third of investors from the United States. This growth in investments has led to the rise of new unicorns – privately-held companies valued at over $1 billion – with four companies holding the status in 2021.

In addition, the continent is an easy place to start a company, with one of the highest entrepreneurial rates globally. This is not unusual – developing economies often have high numbers of startups driven by a lack of employment – but the increasing prevalence and the sinking cost of mobile phone technology has meant Africa is increasingly digitized. This has motivated entrepreneurs, especially in the technology sector, to innovate to match the continent’s needs. From this, a wave of investment followed: In 2015 only $190 million was invested into startups in Africa, but by 2021 it had gone up to $2 billion. South Africa, Nigeria, and Kenya were the most favorable African countries for startups in the last year, hosting high numbers of companies, good co-working spaces, and a generally robust economic system.

A growing sector, but one that is still far behind 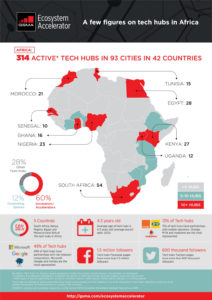 It is easy to conclude that the continent is already a hotbed for tech startups, especially as economic forecasts predict a record year for tech in Africa in 2022, with the possibility of total investments into startups reaching more than $7 billion. But while there is more money flowing into more companies than ever before, Africa’s record of scaling up these companies or even sustaining them, is poor.

There are only 4 unicorns on the entire continent, compared to over 50 in the EU, over 100 in China, and over 200 in the United States. Even for lower-value companies, such as African ‘Zebras’ valued at $200 million, numbers are slim. There are only 20 zebras across Africa, as most startups only make it to the series B funding stage. In fact, the returns on venture capital investments in Africa are less than 3% over 5 years on average, compared to 11% in Asia-Pacific and 16% in Europe.

A challenging place to grow a startup

On top of this, key sectors, especially business-to-consumer ones such as financial services and energy are often controlled by state monopolies that use their market power to prevent new companies from challenging the status quo, rather than advancing the national interest or providing a level playing field.

This leads to an inhospitable startup environment that in turn stops job creation and economic development, and threatens the entire startup sector by preventing innovative products from reaching the market.

The outlook for the future

Africa has all the pieces needed to become one of the most innovative regions in the world: high entrepreneurship, a large free-trade area, and a young and growing population that adopt new technology quickly. To see continued growth in the sector, African governments need to build and deploy a digital economic policy that encourages investment, improves the business environment through clearer regulation, and creates support networks for startups, as well as expand the continent’s digital infrastructure. Not only does this lead to short-term startup growth, but it stops the biggest companies from growing dependent on the world’s leading technology players, making the continent more self-sufficient in the longer term.