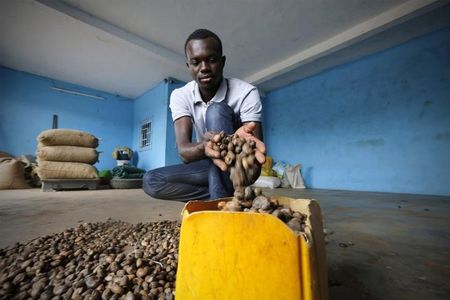 ABIDJAN (Reuters) – Ivory Coast’s 2015 cashew nut crop rose 24 percent to a record 702,000 tonnes and marketing of the crop will begin on Feb. 15, the West Africa nation’s government said on Wednesday.

The government has set a minimum farmgate price of 350 CFA francs ($0.5988) per kilogram, compared with 275 CFA francs the previous year, said government spokesman Bruno Kone. He said farmers have received a total 119 billion CFA francs in 2015.

In addition to being the world’s top cocoa producer, Ivory Coast is also Africa’s biggest cashew grower. The increase in cashew output has been boosted by government reform and investment, the statement said. A decade ago, Ivory Coast produced around 80,000 tonnes of raw nuts per year.

With output growing by over 10 percent annually amid strong demand from Asia, the cashew sector has attracted the attention of a government keen to kickstart the economy after a decade of war and political chaos that ended in a brief 2011 civil war.