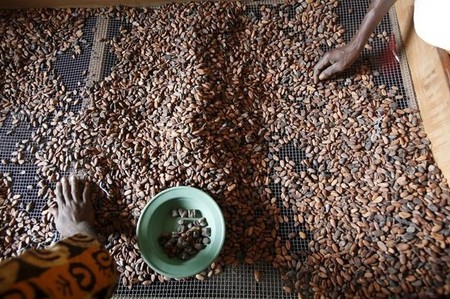 ABIDJAN (Reuters) – Purchases of cocoa in Ivory Coast’s mid-crop season that starts in April have ground to a halt because of a lack of rain and harsh winds that have also hit quality, farmers and buyers said.

Forecasts for the April-October mid crop say it could drop to between 380,000 and 390,000 tonnes, a 24 percent fall from 502,000 tonnes in the same harvest last year, according to several trading houses and cocoa producers.

The West African country is the world’s biggest producer of cocoa, with output of around 1.8 million tonnes per year, of which the mid-crop represents about 30 percent. Dry weather has already reduced forecasts for the 2015-2016 season to around 1.6 million.

Many exporters have reduced or stopped buying altogether as a lack of rain has made beans smaller and twice as acidic as usual.

“The quality is … at a level where we would prefer not to buy at the moment,” said the director of an exports company in Abidjan, who declined to be identified. “We will see in June if that changes.”

Only seven of more than 100 accredited operators have bought beans and opened their factories so far. About 80 percent of exporting companies have stopped buying, exporters said.

On Monday exporters bought 2,800 tonnes of cocoa in the ports of Abidjan and San Pedro, down significantly from the normal haul of 20,000 tonnes.

While smaller beans may be bought by local grinders instead of exported, they produce more acidity and less butter than larger ones, forcing grinders to purchase more for the same result. Acidity levels, or FFA, stood at 3.5 percent against a usual level of 1.75 percent, exporters said.

As a result, grinders have largely foregone purchases so far this mid-crop season, opting to wait for any improvements in the crop that may appear toward the end of the harvest.

Recent rain in the main cocoa-growing regions was too late to affect the development of pods on the trees, farmers said.

“We are happy with the rain’s return, but it’s too late for the production,” said Salomon Lohami, who owns a seven-acre cocoa plantation in Kahin. “If it was January or February, that could change the harvest, but not at this point.”