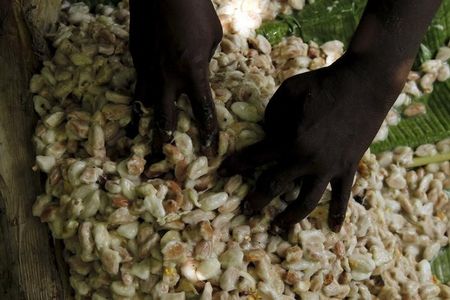 ABIDJAN (Reuters) – Rain that has fallen in many of Ivory Coast’s cocoa growing regions will aid the April-to-September mid-crop but damage caused by the Harmattan wind remained a concern for some, farmers said on Monday.

The Harmattan is a wind that usually blows from the Sahara during December to March. At its peak it can destroy cocoa pods and sap soil moisture, making beans smaller. Ivory Coast is also in its dry season from mid-November to March.

Farmers said their eyes were on the April-to-September mid-crop since most of the main cocoa crop was complete.

In the western region of Soubre, at the heart of the cocoa belt, an analyst reported 37 millimetres of rainfall in the spell, compared with none last week.

Salame Kone, who farms in the outskirts of Soubre, said farmers were pleased with the rainfall this week and hoped it would continue so the mid-crop would start well. But the main crop had ended poorly, he said, adding:

“There are few pods on the trees. The flowers of the main crop weakened a great deal.”

In the eastern region of Abengourou, known for the good quality of its beans, farmers reported one good downpour followed by the return of the Harmattan dry wind.

N’Dri Kouao, who farms near Niable, said little of the main cocoa crop remained and predicted that, if the weather persisted, the mid-crop would disappoint.

“The rain is good but the return of Harmattan worries us because it is drying up the leaves and the flowers,” said Kouao.

Similar growing conditions were reported in the western region of Duekoue.

In the centre-western region Daloa, which produces a quarter of Ivory Coast’s national output, farmers reported no rain, adding that persistent drought had weakened trees.

Farmer Albert N’Zue said the mid-crop may be small in the first three months because of the weather conditions.

“Many trees will not endure for a long time if it doesn’t rain soon,” said N’Zue.

Downpours were reported in southern regions of Divo and Aboisso.