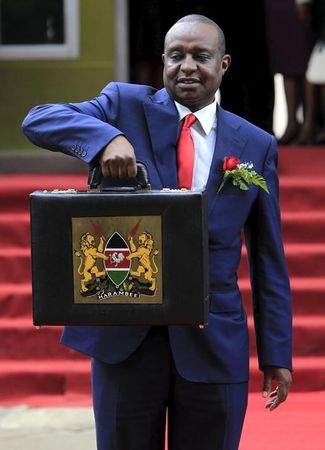 The government had forecast a budget deficit of 8.7 percent of gross domestic product for 2015/16, which unnerved investors. Draft figures released in February showed a revised 2015/16 deficit of 8.1 percent, falling to 6.9 percent in 2016/17.

Finance Minister Henry Rotich said in a short telephone interview that the supplementary figures sent to parliament had increased spending in some areas, such as security, but these were outweighed by cuts elsewhere.

“We are increasing spending in some areas and cutting in others but, overall, cuts are more than increases, so we have a net cut of around 50 billion (shillings),” he said.

President Uhuru Kenyatta’s political coalition dominates parliament and is expected to back the revised numbers.

When the 2015/16 budget was announced last year, expenditure including interest payments was forecast at a little over 2 trillion shillings. The International Monetary Fund has urged the government to narrow the deficit. [nL5N16N0KK]

Rotich said last month that the government would cut net domestic borrowing for 2015/16 by a quarter to 168.2 billion shillings as a result of spending cuts prompted by sluggish revenue collection.