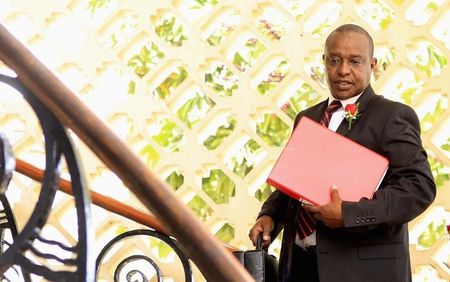 NAIROBI (Reuters) – Kenya’s economy is expected to grow 6.1 percent in 2016 and the government wants to trim ballooning budget and current account deficits to steady the economy, its finance minister said on Thursday.

Kenya, East Africa’s biggest economy, set a budget deficit target of 8.7 percent for the 2015/2016 fiscal year starting July, unnerving some investors who were also uneasy about Kenya’s current account deficit, which stood at above 8 percent.

The current account deficit was fuelled by a growth of imports like oil and consumer goods which was not matched by growth in exports. The budget deficit swelled due to increased spending on infrastructure projects and local government units created in 2013.

Officials and investors say the government has to deal with the deficits to boost investor confidence and stave off instability in the currency and borrowing rates. The shilling lost 11 percent against the dollar in 2015, but faired better than most African currencies.

Finance Minister Henry Rotich said the global slump in the price of crude oil had helped the country’s current account deficit to improve due to a lower import bill.

“With the measures we are taking to cut the fiscal deficit, the twin deficits will obviously go down,” he told Reuters by phone.

“We are aiming at around 6.5 percent (current account deficit) and also getting our fiscal deficit, including grants, coming down to about 4.5 percent.”

The Treasury wants to start attaining those targets from the next fiscal year and into the medium-term, Rotich added.

He said Kenya was reviewing all government ministries’ expenditure plans for this fiscal year with a view to cutting unnecessary items and reducing borrowing.

“By the end of this month we will have known what savings we are likely to achieve from the exercise,” he said, adding the measures will be contained in a supplementary budget to be taken to parliament for approval.

Growth was expected to be 6.1 percent this year, slightly up from last year’s projection of about 5.8 percent. Rotich said growth will be driven by public investments in infrastructure, a recovery in tourism and farming.

“We are still seeing infrastructure supporting the growth. Construction remains strong. We see recovery of tourism boosting that. With the favourable weather, we see agriculture will also be strong,” he said.

The government is investing in a Chinese-built 327 billion shilling ($3.2 billion) modern railway, tarmac roads and power plants. Tourists have started to return to the country’s beaches and game reserves after key Western markets like Britain lifted travel warnings.

The warnings had been put in place after a string of attacks by al Shabaab militants from neighbouring Somalia.

Rotich said the main risks to Kenya’s growth outlook were global developments including any slowdown in the Chinese economy, the direction of the oil price and U.S. interest rates.

“The risks continue to be external developments. It has become difficult to get a full feel of forecasts for global economic developments,” he said, adding the main risk at home was any adverse weather like poor rainfall.