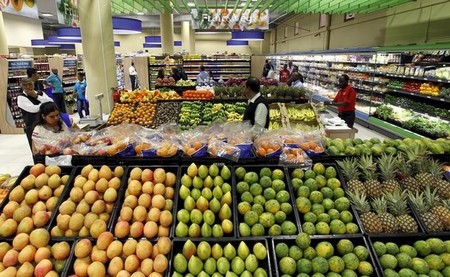 NAIROBI (Reuters) – Privately-owned Nakumatt, Kenya’s biggest supermarket chain by sales, has agreed to sell a 25 percent stake to a foreign fund for $75 million, part of an effort to bolster its balance sheet and pay off debts, its managing director said on Wednesday.

Nakumatt, which started with a single store in Nairobi in 1992, operates 68 outlets in Kenya and neighbouring states Rwanda, Uganda and Tanzania.

“We are already at final stages with the investor. We are just waiting for the money to come,” Atul Shah told Reuters, without naming the fund involved.

The deal is part of the chain’s plan to overhaul its balance sheet and restructure a $75 million debt tranche owed to four local banks, Shah said. Expansion and other investments have pushed its debt up overall to $150 million.

“Nakumatt is going through some financial stress. We are out looking for funds and we are restructuring,” Shah said, adding the cash was expected before the end of February and would help the firm extend the tenor of its debts to more than five years.

“It stabilises our cash flow and it also gives a little room for the expansion plan that we have in place,” he said.

Nakumatt is being guided by a Dubai-based transaction adviser that Shah did not name. The equity deal with the foreign fund values the business at $300 million.

“It is a fair valuation,” Shah said, noting the business had expanded from a single small store to a regional network in 24 years.