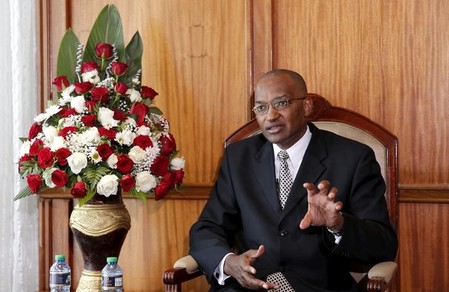 NAIROBI (Reuters) – Inflation in Kenya is under control despite a food price-driven rise in June and pressure from recent increases in the fuel tax, the governor of the central bank said on Tuesday, a day after the bank left interest rates unchanged.

The year-on-year rate of inflation rose to 5.80 percent in June from 5 percent in May, as prices of food items went up. The retail prices of fuel went up on July 15, ushering in more pressure on the rate.

Policymakers left the benchmark lending rate unchanged at 10.50 percent on Monday saying the pressure on inflation was temporary.

Njoroge said there was ample liquidity in the banking sector, adding that it was also starting to be distributed more evenly among the country’s 42 lenders.

The governor, who has in the past said liquidity in the sector was concentrated among a handful of large lenders, said on Tuesday mid-sized banks were getting more liquidity as their larger counterparts saw a reduction in recent months.

Two mid-sized banks and a smaller lender were shut down in the nine months to April this year, raising concerns about the health of the banking sector.

He said Britain’s vote to leave the EU last month could have implications for the Kenyan economy in the medium term as foreign investors take a wait-and-see attitude.

Britain is an important source of investments for the East African nation, whose exporters are also fretting about the impact of Brexit on a trade deal between the East African Community and the EU that is supposed to be signed by October.

Tanzania has said it may not sign the deal, deepening the anxiety among Kenyan officials and exporters.