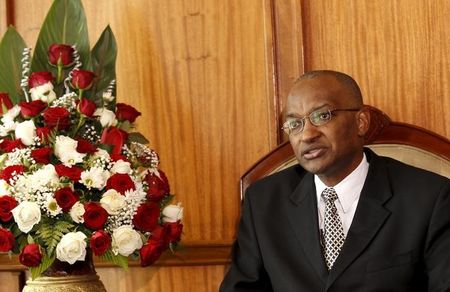 NAIROBI (Reuters) – Kenya’s current account deficit will fall in 2015 and 2016 and the country’s economy will be supported by macroeconomic stability and low oil prices, its central bank governor said on Thursday.

Patrick Njoroge said the current account deficit was forecast to fall to 8.5 percent of gross domestic product in 2015, from 10.4 percent the year before, and narrow further in 2016.

The currency of the East African country is expected to remain stable after losing 11 percent of its value against the dollar in 2015, he told a news conference.

“We are now closer to the fundamentals,” he said, citing the narrowing current account deficit.

The central bank kept its benchmark lending rate at 11.5 percent on Wednesday, saying its current stance was adequate to dampen inflation.

Njoroge said that high commercial bank lending rates, at above 17 percent in December, were “troubling” but that liquidity was now evenly distributed among banks after getting skewed following the collapse of one bank.

Njoroge said he was open to “real” dialogue with shareholders of Imperial Bank – under receivership since October – and reiterated the fate of the bank will be clearer in March.