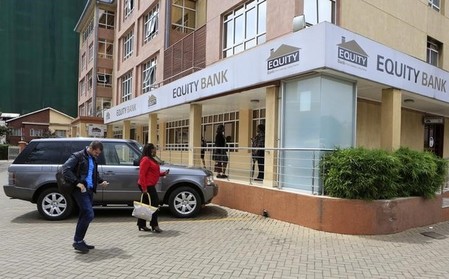 The failure of three small and mid-sized banks in Kenya in the past year has fueled talk of consolidation, with Equity’s rival Kenya Commercial Bank planning to buy one of the institutions now under administration.

But Equity Group Chief Executive James Mwangi said he would focus on expanding his bank’s existing subsidiaries in the region. After acquiring a lender in the Democratic Republic of Congo, Equity has already added a dozen new branches.

“We will focus on these subsidiaries and make them substantial actors in the markets they are in,” he told an investor briefing.

Alongside Congo, his bank also has units in Uganda, Rwanda, Tanzania and South Sudan.

Equity reported a pretax profit for the first quarter of 2016 of 7.3 billion shillings ($72.71 million), as it secured cheaper funds from shareholders and creditors while increasing lending to customers.

The bank increased its borrowed funds by 76 percent to 46.0 billion shillings. The extra funds came with an interest rate of Libor plus one, or about 4 percent, and was lent to customers at prevailing double-digit rates, he said.

Non-performing loans stood at 3.8 percent of the total, below the 8 percent recorded for the industry in March.