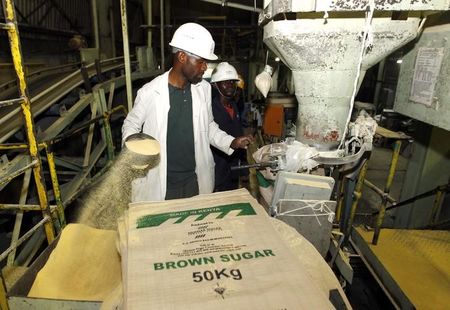 NAIROBI (Reuters) – Kenya’s Mumias Sugar expected to perform better in the second half after posting a wider pretax loss for the six months ended Dec. 31, the company said on Tuesday, adding falling prices due to illegal imports could pose a challenge.

The heavily-indebted firm has been struggling with cash flow problems in recent years, forcing the government to step in with bailout funds and has hired a new chief executive, Errol Johnston, to drive its turnaround.

“During the six-month period, high interest rates coupled with a depreciated Kenya shilling adversely affected the company in terms of high cost of finance and foreign exchange losses,” it said.

“This coupled with high operating and administrative costs saw the company post a pretax loss … which is 9 percent higher than the … loss incurred during a similar period last year.”

The shilling hit lows last seen in October 2011 in late 2015, while interest rates peaked above 22 percent.

Mumias – which also faced hurdles from raw material shortages and low sugar prices – said it was seeking an additional 2 billion shillings cash injection from the government.

Kenya has used high tariffs to protect its sugar farmers but the policy has encouraged smuggling of cheaper sugar imports.

It said loss per share widened to 1.04 shillings, from 0.95 shillings during the first half ending December 2014.