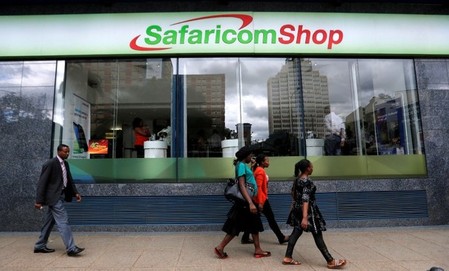 NAIROBI (Reuters) – Safaricom raised its forecast for full-year core profit on Friday after a 31 percent jump in the first six months of the year, driven mainly by growth in revenue from mobile data services.

Safaricom said it expected earnings before interest, tax, depreciation and amortisation (EBITDA) for the year to March 31 to come in at 94 billion shillings ($925 million) to 97 billion, up from a previous range of 89 billion to 92 billion.

“Mobile data is our fastest growing revenue stream, and we will focus on increasing the numbers of 3G and 4G smartphones on our network through launching more 4G sites and offering affordable smart devices,” the company said in a statement.

Safaricom, which is 40 percent owned by Britain’s Vodafone and by far the leading mobile phone operator in Kenya, said revenue from mobile data services surged 46 percent to 13.4 billion shillings in the six months to the end of September.

For the first time, revenue from non-voice services accounted for more than half of Safaricom’s overall telecoms services revenue, contributing 53 percent, up from 47 percent last year and 49 percent in the year to the end of March 2016.

Safaricom shares, which had climbed 7 percent this week ahead of the results, were 1 percent lower on Friday at 21 shillings at 1100 GMT. Earnings per share rose to 0.60 shillings from 0.45 shillings.

The company that pioneered the successful M-Pesa mobile money transfer service said it had spent 18.9 billion shillings in the first half as part of efforts to broaden the reach of high-speed mobile internet across the east African country.

Its 4G service now covers 32 out of 47 counties in Kenya and its 3G network reaches 80 percent of the population.

Chief Financial Officer Sateesh Kamath said he expected Safaricom to have close to 1,100 base stations with 4G by the end of March, up from 635 at the end of September.