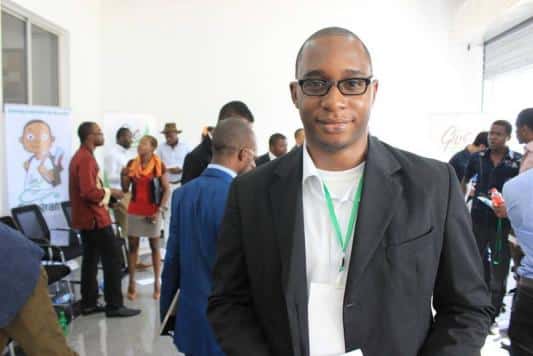 A Cameroon developer is one of the first to focus a game on the mythology of the continent.

With the release of one of the first African-themed computer video games produced on the continent, Cameroon’s Olivier Madiba, 30, hopes to shake up a global industry dominated by white game developers who create white heroes.

To Madiba, it represents more than a video game, Madiba said.

“Our dream is bigger than that. We want to build a bridge between the gaming industry and Africa,” Madiba, the co-founder chief executive officer of Kiro’o Games said.

Game based on African myth

Based on African mythology, the game features Enzo Kori-Odan and his wife, Erine Evou, as they try to take back his throne in a land called Zama after his brother-in-law stages a coup and ousts them.

The game was a long time in the making. He first started talking to friends about making a game about Kori-Odan in 2003 while he was studying software development at the University of Yaoundé.

His father worked at a sugar factory and ran a video store in Douala when Madiba was growing up and video games became his obsession. However, since Cameroon has no video game industry, he could not find a career path in his own country.

After graduating from the university with a degree in computer science in 2009, Madiba taught himself how to create games on the internet and decided to start his own company, based on the Cameroon capital, Yaoundé.

Madiba launched the studio Kiro’o Games, in 2011, and his team began working on the game in earnest.

The studio, which has a staff of 20 artists and developers, raised $270,000 from investors and more than $55,000 in a successful Kickstarter campaign, which enabled them to complete the project.

When he was young, he had noticed few games had African heroes and the continent was often shown through the lens of war and crisis. Most games feature white heroes because most game developers are white, he said.

Game takes place in the future

Madiba wanted to change that with the story of “Aurion: Legacy of Kori-Odan,” an epic 2D adventure in which the usurped king and queen fight to regain their thrones from the evil brother-in-law.

While the story comes from African myth and tradition, the name adds an element of science fiction: The game takes place in a world that exists 10,000 years in the future on another planet far away from Earth.

Using African characters rather than the typical warriors and magicians of role-playing games, Madiba said he wanted to create a world where “Africa was on top.”

But Aurion has captured much wider attention, enough that the U.S. State Department invited Madiba to participate in the 2016 Mandela Washington Fellowship Program, which is part of the Young African Leaders Initiative launched by President Obama.

In addition to being a Kickstarter Staff Pick and being featured in The Wall Street Journal, the game is receiving very good reviews, complimenting both the design and the storytelling.

It is available only for PC but Madiba hopes to develop it and other games with animation for mobile platforms as well. With low labor costs in Cameroon, he believes he can create a profitable business creating games that also tell the African story.

He hopes the game will help foster more diversity in games and create a better understanding of Africa. “Being African isn’t based on your color … It’s how you see the world and what you want to share.”