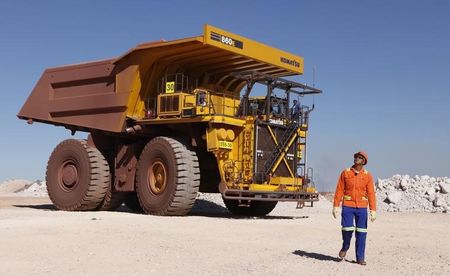 JOHANNESBURG (Reuters) – South Africa’s Kumba Iron Ore said on Tuesday it expected full-year earnings to December 2015 plunge as much as 67 percent as it battled slumping prices for the steel-making ingredient.

The unit of Anglo American said headline earnings per share (EPS) are expected to fall by between 65 percent and 67 percent to 11.45 rand and 12.05 rand.

Kumba is due to release its full-year results on Feb. 9.

Headline EPS is the main gauge of profit in South Africa and strips out certain one-off items.

Iron ore prices fell about 35 percent in 2015 due to a supply glut and growth concerns in top consumer China, forcing Kumba to cut jobs and restructure its main mine, Sishen.

Kumba took a 6 billion rand ($374 million) writedown charge in 2015 for the reconfiguring of the Sishen mine.

Its shares initially fell as much as 8 percent before recouping losses to close 3.1 percent higher at 37.51 rand.

“The market had expected that there will be some write off. It is good that Kumba is taking the medicine it needs and focusing on cutting costs,” said Sanlam Private Wealth portfolio manager Greg Katzenellenbogen.

The world’s largest producer of iron ore, Vale SA, said on Thursday it would recommend to its board that no dividend be paid to shareholders this year because of the slump in commodity prices.