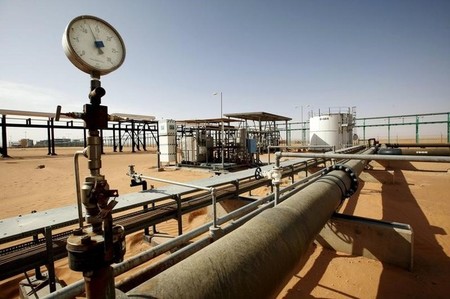 By Ahmad Ghaddar and Ahmed Elumami

LONDON/TRIPOLI (Reuters) – Libya’s Sharara oilfield has restarted after the end of protests by an armed group that had blocked pipelines there, National Oil Corp (NOC) chairman Mustafa Sanalla said on Thursday.

No details were immediately available about output at the field, which has a production capacity of nearly 300,000 barrels per day (bpd).

A Libyan oil source and a local official had earlier told Reuters production had resumed at the field, which is operated by state oil firm NOC with Repsol, Total, Norway’s Statoil and OMV.

The oil source said El Feel oilfield, with a capacity of about 90,000 bpd, had also restarted. El Feel and Wafa field condensate make up the Mellitah blend which is exported from Mellitah terminal operated by NOC and Italy’s ENI.

Sanalla, speaking on the sidelines of an industry event in Paris, said Libyan oil production was about 491,000 bpd on Thursday and NOC hoped to reach 800,000 bpd soon.

He said NOC still planned to reach a production target of up to 1.1 million bpd by August, a goal that will receive a boost from the resumption of output from Sharara.

NOC said in a statement later it had agreed to lift a force majeure on Sharara oilfield, and production at the field would reach 200,000 bpd. It was not immediately clear when the lifting of the force majeure would come into effect.

News about restarting Sharara and El Feel weighed on crude prices, pushing Brent crude futures around 1.5 percent lower to $51.04 a barrel at 1645 GMT. Investors are worried by oversupply in the market.

Oil security in Libya remains fragile and attempts to negotiate with groups that periodically block and close down pipelines to make political demands have fallen through in the past as rival factions compete for power.

Mohamed Almahdi Alnajeh, a member of the local Zintan region elders council, told Reuters it had reached a negotiated deal with the group blocking the Sharara pipeline to end the protest. The protesters were told to take demands to NOC, he said.

The Sharara blockade was the latest in a series of disputes. Protesters blocked a pipeline leading from Sharara in March. The protests ended in early April but resumed a week later, halting NOC’s plans to raise production there to 270,000 bpd.

Libya’s oil production has been hit by protests, Islamist militant attacks and fighting among rival military factions since the fall of Muammar Gaddafi in 2011 sent the country spiraling into turmoil.

(Additional reporting by Julia Payne in London and Alex Lawler in Paris; Writing by Patrick Markey; Editing by Edmund Blair and Mark Potter)