Military Base Expansion: an End to Japan Peace State 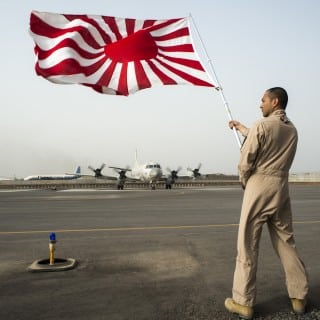 A Japanese military base in Djibouti, on the East African coast, is being expanded as part of a new militarized movement happening in Japan and as three Japanese government sources have revealed, to counter Chinese influence on the continent.

Since 2011, a Japanese Self Defense Force contingent has occupied a 12 hectare site in Djibouti and operated a maritime patrol aircraft from the base. Originally described as a ‘facility’ rather than a military base, United Press International (UPI) reports the area houses air, land and sea-based forces as part of an active, ongoing anti-piracy mission in the Gulf of Aden. According to UPI this offers Japan increased cooperation with allied partners and further projects military power.

A Japanese Defense Ministry spokesman said that in addition to the land Japan had borrowed, it was considering leasing additional land to the east. Although Japan relies heavily on imports of oil and gas from the Middle East, the UPI article claims Japan’s expansion represents an agenda beyond solely protecting its economic security. According to Reuters, a Japanese government source told the agency that China’s increasing presence was the reason for Japan’s rising involvement.

Chinese investment in African Nation’s development is increasing exponentially. In December of 2015, China pledged $60 billion as part of a loan and aid package to Africa to help with development projects, to improve agriculture and reduce poverty. According to the Wharton Africa Business Forum held in late 2015, Chinese economic presence on the continent has continued to skyrocket, from $7 billion in 2008 to $26 billion in 2013.

According to Reuters, China is seeking ties with Africa to gain access to natural resources and find new markets. However, Japan has also pledged to increase its support with $30 billion towards infrastructure, healthcare and education in Africa. China is putting money into new infrastructure and raising its presence in Djibouti, said the Reuters source. “It is necessary for Japan gain more influence.”

Expansion of Japan’s Djibouti Base

Strategically located by the Red Sea, and cornered by Ethiopia, Eritrea and Somalia, Djibouti also hosts US, and French Bases. China started construction on a military base in the country at the beginning of 2016. The base is the first overseas military facility and coastal logistics base that will provide supplies to naval vessels taking part in peacekeeping and humanitarian missions, reports Reauters.

Japan’s expansion of their base would include C-130 transport aircraft, Bushmaster armored vehicles and extra personnel, Reuters source claimed. The extra leased land would be smaller than the existing base and would cost roughly $1 million per year. The source claimed Tokyo would justify the expansion by pointing to the need to have an aircraft in the area to evacuate Japanese citizens from troubled areas. According to UPI, however they point to an increasing militarization of Japan.

Long been described as a ‘peace state’ after a constitution imposed on the country by the United States after World War II, Japan may be leaning once again towards an era of military action.

As part of the WWII constitution, Japan’s constitution stated the country would forever ‘renounce… the threat or use of force to settle international disputes’ and that ‘land, sea, and air forces, as well as other war potential, will never be maintained’.

However, a controversial new legislation backed by Prime Minister Shinzo Abe’s government announced in March of last year, stated Japanese forces could engage in collective self-defense and come to the aid of an ally under attack. The legislation was passed against the wishes of the majority of polled Japanese citizens who opposed it and in direct violation of the constitution.

Stepping back from seven decades of state pacifism, Prime Minister Abe is seeking to give Japan’s SDF a greater role in regional and global affairs. Djibouti’s military base may be just the beginning of Japan’s military operations.

Like Africa, Featured Military Base Expansion: an End to Japan Peace State